We’ve always known Verry Elleegant was capable of a demolition job like she produced to win the Tancred Stakes (2400m) at Rosehill on Saturday.

Punter’s Intelligence sectional data illustrates her supreme moment as her final 600m of 35.26 which is three lengths better than any of her rivals.

Mustajeer did his Sydney Cup hopes no harm as he snatched second from Avilius near the line, his overall last 600m was a fair 36.19 but his final 200m of 12.46 was second fastest of the race.

Dare we say it but Kementari might want to be a racehorse now he’s gelded and his first-up third in the Star Kingdom Stakes (1200m) was a superb return.

The five-year-old posted the fastest last 600m of the day, running 34.22, as he chased hard behind Vegadaze and Manicure.

That time was a length faster than anything else in the race and he kept it up running the fastest final 200m, albeit narrowly, of 11.78.

You can imagine he’ll be a lot fitter next time around and, away from Group 1 company, could post that elusive win and a race like the Group 3 Hall Mark Stakes (1200m) on April 18 would be ideal. 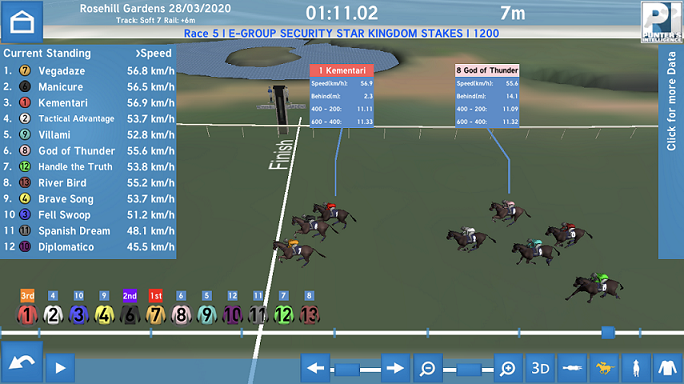 It might be worth forgiving God Of Thunder out of the Star Kingdom, he settled last from a wide gate and found it tough to make significant ground but he ran 34.38 (second fastest) for his last 600m in finishing fifth.

Surrey Thunder is a name to mark down as a horse to follow from Rosehill.

The import was having his first local run and 1400m is well short of his best but he was so strong late, overcoming a couple of checks, to run fourth behind Royal Celebration.

Probabeel wasn’t able to reel in Shout The Bar to win the Group 1 Vinery Stud Stakes (2000m) but her effort was outstanding in conditions she’s clearly not so comfortable in.

If she can strike good 4/soft 5 for her next start she will take some beating.

Can Cascadian produce an effort in Saturday’s Group 1 $1.5m The Star Doncaster Mile (1600m) like he did in the Prelude?

The flashy Godolphin galloper produced what many were waiting to see as he came from last, running 34.77 (three lengths superior) for his last 600m and an 11.60 final 200m which was two lengths better than anything else.

And it's worth noting the run of Delectation Girl, sixth in the Emancipation, who also made good ground from well back running 34.71 for her last 600m (nearly two lengths faster than her rivals).