He’s no stranger to a supreme first-up performance and Roheryn did it again at Rosehill on Saturday with a visually appealing win that stacked up on the clock.

Punter’s Intelligence sectional data showed the Godolphin galloper posted the fastest last 600m of the day, and by quite a margin, running 33.89 in winning the De Bortoli Wines Handicap (1100m).

So far Roheryn has proven indestructible first-up so it’ll be interesting to see if he can reproduce that kind of effort again this time in. If he can then he’ll graduate to stakes company quickly.

It’d be worth staying with Embracer after he ran third behind Roheryn at his first run back. 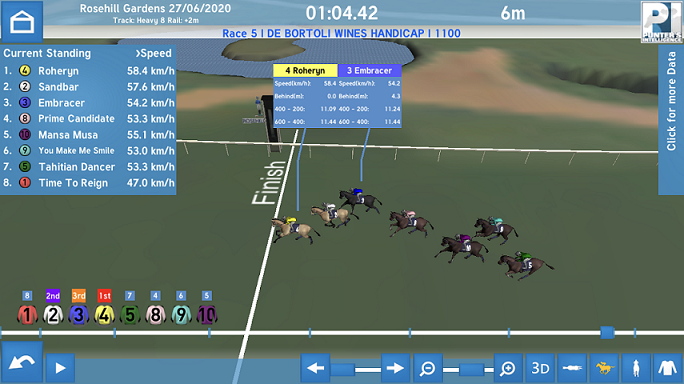 On the Godolphin theme Kordia also produced a big fresh effort in winning at his first run for over a year in the Hyland EOFY Sale Handicap (1200m).

Kordia was a stakes winner at 1400m last year so there’s upside distance wise and if he can do it again second-up there’s a bright future for him.

Mark Newnham has a smart filly on his hands in the shape of Fulmina who was dominant in the Rosehill Bowling Club Handicap (1800m).

It was a comprehensive win, she covered an extra 11.9m and while the likes of Zing raced wide throughout that filly only covered an extra 13.1m and her last 600m was 35.24 so even though she had no cover she was weaker late.

A few horses from the Chris Waller yard performed strongly in unsuitable races so keep an eye out for these in the coming weeks.

Both Order Again and Sambro had to come back from 1600m last start into the Listed Civic Stakes (1350m).

Order Again posted the fastest last 600m of the race (34.43) in finishing second, at his second run for Waller, behind Trumbull while Sambro wasn’t far behind running 34.47 including the race’s fastest last 200m of 11.74.

It’s safe to say Monegal backed up that upset first-up win by finishing second in the same race and she was responsible for the fastest last 600m of 35.44, plus she was the only horse in the race to break 12 seconds for each sectional between the 800m and 200m.