The proof will come in what he does next time but Chat signalled he might be coming of age with his dynamic first-up win at Rosehill on Saturday.

It was Chat’s first win since his first-up victory last preparation and he raced consistently in some good quality races through the spring and summer.

He’s yet to win, or place, second-up so how he performs next time around will tell us whether he’s gone up a notch or if this win was a peak, with a light weight, he can’t repeat. On his side is the fact he is more than capable of racing on speed and proven up to 1400m.

Godolphin’s Gaulois does have a superior second-up record so he’s a likely improver on a solid return, finishing fourth behind Chat. 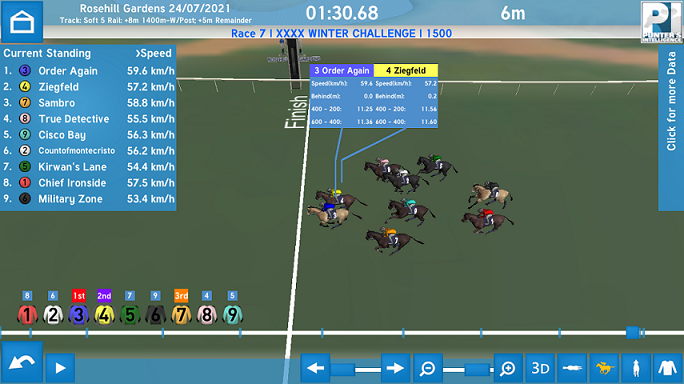 Order Again put it all together, overcoming traffic early in the straight, to take out the Listed Winter Challenge (1500m) with easily the race’s best, by over two lengths, last 600m of 34.04.

He’s soon to be an eight-year-old and perhaps races like the $1m The Gong and the Group 2 Villiers Stakes over a mile would be up his alley later in the spring.

Cuban Royale ran right up to his first-up effort to take out the Agency Real Estate Handicap (1200m) and he was strongest late with the fastest last 200m of 11.33.

Behind him Above And Beyond recorded a last 600m of 34.10 in a solid first-up effort and sixth placed Rule The World, having his first run for Mack Griffith, made a promising return with the fastest last 600m of 34.04.

The Quayclean Handicap (1300m), won by Frosty Rocks, was dominated by the on pacers and was a sprint home, with all but two horses recording a sub-34 last 600m.

So the effort of Ventura Ocean in fourth place first-up suggests he’s in for a successful prep. The Kris Lees-trained import clocked a race best last 600m of 33.56, including the fastest 400m-200m of 10.90.

Poetic Charmer posted the fastest last 200m of 11.32 in a much improved second-up effort and he should be able to hold his form now.

A couple more to note are Zoo Station, who had no luck again in the TAB Highway (1500m) running a last 600m of 35.66 which was just 0.10 outside the race best and she was badly held up for much of the straight; while Bazooka is closing on an elusive win with a race best 34.44 last 600m in the Bowermans Commercial Furniture Handicap (1500m).