The jury was out on The Autumn Sun prior to his return in the Hobartville Stakes but there’s no other way to describe that return than sensational.

The Autumn Sun was conceding the leader, and eventual runner-up, Vegadaze about 12m and was hemmed in on the fence at the 800m so needed to produce something special to win.

Punter’s Intelligence data shows Vegadaze didn’t really overdo it early, the first 600m was run in 38.12 and he was able to sprint home better than anything else outside the boom colt.

But The Autumn Sun is just another level – his last 600m of 33.93 was a tick under 0.6 faster than Vegadaze so while the margin wasn’t great he had to produce a big sprint to pick him up.

There’s no doubt he’s back at least as good as ever and can only improve up in distance. 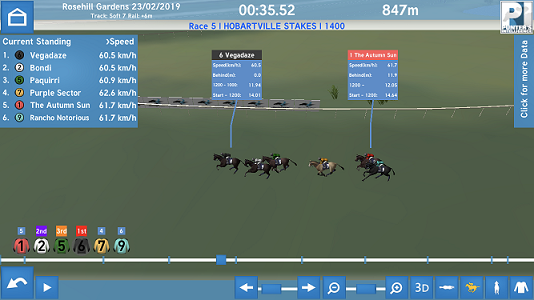 The sectionals out of the Group 2 Silver Slipper Stakes (1100m) make for fascinating reading.

If you were wondering why Tassort couldn’t pick up the winner Time To Reign after following him into the straight the answer is simple – they ran almost identical last 600m splits.

The major difference came in the first 100m – Time To Reign was reasonably fast into stride running 7.49 while Tassort was 0.4 seconds slower. From there the two colts couldn’t be split.

It’ll be interesting to see what happens when they clash again in the Todman Stakes two weeks out from the Golden Slipper.

The placegetters in the Group 2 Millie Fox Stakes will have all eyes on them heading to the Group 1 Coolmore Classic on March 16 – both I Am Serious and Savatiano had serious flashing lights on.

A couple of others to highlight:

Prophet’s Thumb attacked the line hard in the Spark Of Life Handicap running 33.94 for her last 600m.

The Country Championships Qualifier at Albury was won comprehensively by Bennelong Dancer, she covered an extra 9.1m and put the race away from the 400m.