It wouldn’t be a stretch to suggest we saw the Rosehill Guineas trifecta in the Group 2 Hobartville Stakes (1400m) at Rosehill on Saturday after the eye-catching returns of Group 1 winners Shadow Hero, Castelvecchio and Warning.

The trio finished fifth, sixth and seventh respectively behind Brandenburg in the Hobartville but given the race was basically a sit and sprint their efforts had even more merit.

Punter’s Intelligence sectional data shows the Hobartville’s time of 1:25.30 was more than three lengths slower, close to four, than the other 1400m event won by Master Of Wine (1:24.73).

The leader Microphone ran his first 600m in 38.05, three lengths slower than Cradle Mountain led the Benchmark 100 race that followed (37.54), so anything trying to run on was at a disadvantage.

Castelvecchio hit a noticeable flat spot around the 600m, the data reflects that as he ran 11.75 which was the second slowest for the 600m-400m. At that point both Shadow Hero and Warning were able to slide in the race a lot easier.

It’ll be interesting to see what unfolds when they clash next in the Group 1 Randwick Guineas over the mile but it’s the 2000m at Rosehill on March 21 that’s shaping as the salivating contest. 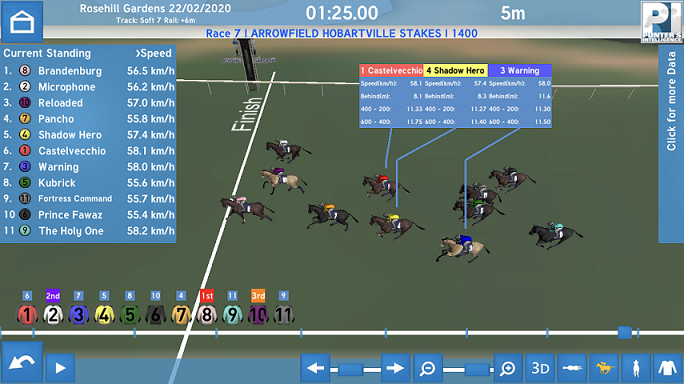 Master Of Wine’s win in the 1400m Benchmark 100 event that followed the Hobartville stamped him as a high class middle distance performer/stayer of the future.

Not only was he able to sit handy on the solid tempo he was the strongest at the finish and that says he’s a complete racehorse.

The gelding ran a sound final 600m of 34.63, second best in the race, and the fastest last 200m of 11.71 as he easily accounted for Aliferous who deserves credit for her first-up run after coming from last and clocking 34.53 for her last 600m.

Savatiano is going to be hard to beat in anything she contests after her demolition in the Group 2 Millie Fox Stakes (1300m).

Sure she had a nice sit behind the speed and on the back of her main rival White Moss but the mare produced just a tick outside the day’s best last 600m running 33.82, more than two lengths faster than her rivals.

There were three races over 1100m and Splintex recorded the fastest time of those three running 1:04.52, which was over a length faster than Farnan’s time in winning the Group 2 Silver Slipper Stakes.

Both raced right on the pace and the first 500m of the Silver Slipper was run 0.31, just on two lengths, faster but Splintex sprinted home in 34.47 compared to Farnan’s 34.75.

Debutant North Pacific made a promising first appearance running 34.78 for his last 600m despite not looking happy in the ground.

The third of the 1100m races was won by Greyworm and he had a picnic in front by comparison, running 30.87 for the first 500m (almost six lengths slower than Farnan) before sprinting home in 34.10 – so no surprise he couldn’t be run down.