The Silver Slipper is often one of the better pointers to the $3.5m Longines Golden Slipper but the jury might be out on the 2021 edition won by Home Affairs.

It’s always a good sign when the two-year-olds produce times competitive with the older horses on the same day but Punter’s Intelligence sectional data shows that wasn’t the case on Saturday.

The youngsters did go out quite hard in the early stages, with Direct running 29.63 for the first 500m compared to 29.90 in Emanate’s race and the slow 30.98 in Andermatt’s event.

Home Affairs was on the speed, taking the trail behind Direct, so was forced to do some early work but ran a 35.11 final 600m and last 200m of 12.16 (both fourth best of the race) and it’s not as though Direct dropped out to run last as he held on for third.

The fastest last 600m of the race went to King Of Sparta (34.75) while Tiger Of Malay clocked the fastest last 200m of 11.88 as they ran fourth and fifth respectively.

Whether this form stacks up as the A-grade Slipper form remains to be seen. 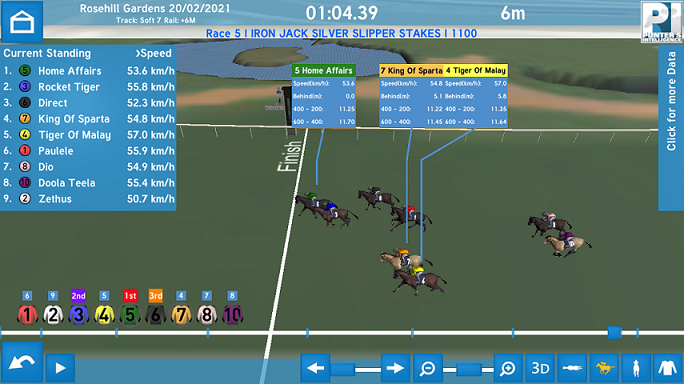 Andermatt posted the meeting’s fastest last 600m of 33.21 and it’s not a surprise as earlier noted given how slowly the race was run in the first half.

Vulpine led out in 30.98 which was some eight lengths slower than the two-year-olds but by the finish the overall time was much quicker.

The Godolphin colt also ran the fastest last 200m of the meeting (11.16) and considering he was first-up since last May there has to be plenty of improvement in him.

Emanate wasn’t far behind Andermatt individually on the clock running 33.28 for her last 600m though overall the race was significantly faster (1:03.82).

She was only second-up and while the race was run to suit her perfectly there’s plenty of scope for improvement in her as well.

Behind them were a couple of runs well worth noting.

Handle The Truth hit the line strongly late into third running 33.85 for his last 600m while Bjorn Baker’s ex-Hong Kong galloper Flat Heaven had no luck at all but still ran 33.77 for his final 600m.

All honours went to the Kiwi three-year-old Aegon in the Group 2 Hobartville Stakes (1400m) and he was as dominant on the clock as he was to the eye.

His last 600m of 33.76 was two lengths faster than the next best in the race and his last 200m of 11.49 was about a length and a half superior. You’d imagine he will only get better up to a mile and perhaps a bit beyond.

King’s Legacy posted the second fastest last 600m of 34.24 so his sixth wasn’t too bad and just ahead of him the stayer Lion’s Roar’s 34.27 says he’s come back in good order for the classics coming up.

A few other runs to note were She’s Ideel who ran an 11.52 first-up for her final 200m in the Millie Fox (1300m) and Fulmina again charged when her race was all over running 33.70 for her last 600m (four lengths better than anything else).