The performance of boom colt Exceedance was rightly the talk of Rosehill on Saturday.

Punter’s Intelligence sectional data tells the story and it’s not just in the rocket-like 32.21 final 600m that captured plenty of attention.

The tale of Exceedance’s fortunes is told in the first 100m of the 1100m sprint. Visually you could see the wasn’t the fastest away and that first 100m was run in 9.10 compared to the leader and winner Splintex who ran 8.44.

Only two horses didn’t run under nine seconds for that first section and in Exceedance’s case it meant it was impossible for him to settle any closer than he did.

From there Splintex was allowed to dominate the speed and compared to the other 1100m race on the day, won by Wagner, he had a picnic. His first 600m was 31.75 and when you’re running 33.39 for the last 600m it’s always hard to run you down.

We know Exceedance is good, how good he is we’ll find out later this year. 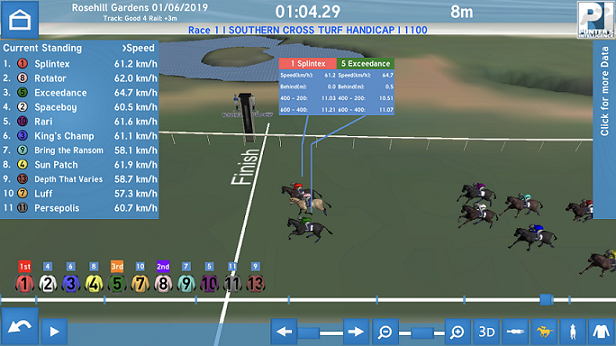 There’s a win this preparation, possibly second-up in Nicci’s Gold on the back of her eye-catching first-up fifth behind Reelem In Ruby.

Significantly, Nicci’s Gold doesn’t have a great first-up record – and she was only a narrow margin from running third – but she’s won three from five second-up and if there’s a bit of rain around she comes into her own as four of her five wins have been on wet tracks.

Nicochet was another to stand out fresh, chasing home Kapajack, and he probably would have finished a little closer had he not been held up.

He hasn’t won this season but he recorded his seventh placing and once he worked into the clear he was the only horse to break 12 seconds for the last 200m running 11.87.

He clearly needs things go his way but Nicochet may yet break through before the end of the season.

It’s not often a stayer’s sectionals stand out as much as those produced by High Bridge in finishing third in the McKell Cup (2400m).