It’s often said you find out how good a horse is when they are beaten and in Diamond Thunder’s case he was enormous in defeat at Rosehill on Saturday.

The Punter’s Intelligence data can illustrate just how much work the youngster endured in the 1200m two-year-old event yet he still held on for third.

But Diamond Thunder finished third and his last 600m of 35.82 came as no surprise. It was tailor made for a backmarker and the winner Kubrick dashed home in 34.39 to score.

He needs to prove he’s not a one-dimensional leader but Diamond Thunder should lose no admirers.

Worth noting the two-year-olds stopped the clock just 0.05 slower than the Benchmark 88 event won by Desert Lord.

The Desert Lord race is one that will produce plenty of form going forward though all honours on the day go to the promising Team Hawkes sprinter. 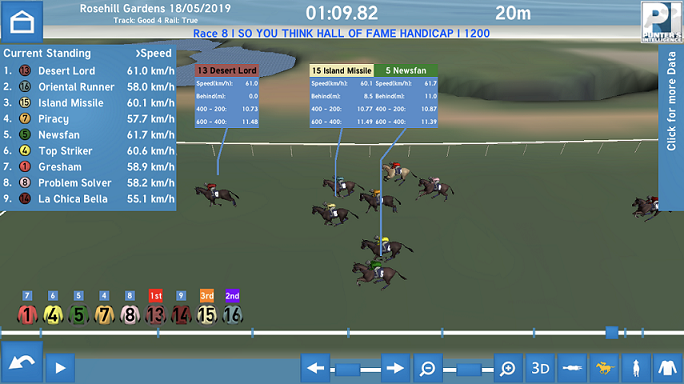 We’ll find out a bit more about where he stands when he steps up in class next start.

There are wins in store for both runner-up Island Missile and fourth-placed Newsfan who caught the eye running on behind Desert Lord.

Island Missile is not really a 1200m horse so to finish second fresh augers well and he closed 33.41 for his last 600m. He was matching it with Desert Lord between the 600m and 200m, just 0.05 slower, but couldn’t sprint with him late.

He didn’t win last prep but strung together three second placings beyond a mile and appears to have come back better.

Newsfan hadn’t raced for six months and she was forced to sit last and wide so there was plenty of merit in her ability to run a 33.36 final 600m, second only to the winner.

Her fourth placing was the first time she’s missed the top three in her nine starts to date and if she draws better next time she can win in similar class.

Dagny had support at odds as she resumed in the Jim Cassidy Hall Of Fame over 1500m and if you can run 33.66 for your last 600m it’ll always take a good one to run you down.

It seems Star Of The Seas is a little under-rated because he gave Dagny about 9m head start with 400m to run and claimed her late running 33 seconds for his last 600m, the best of the day.

He actually clocked the fastest split of the race for each of the final four 200m sectionals so it was a massive performance.