Did we see the Golden Slipper winner when Cellsabeel romped away with the Iron Jack Handicap (1100m) at Rosehill on Saturday?

It’s still two months until the two-year-old classic is run and won and the filly ticked the wet track box in her six length win. Punter’s Intelligence sectional data illustrates the merit in the win.

While Cellsabeel had first use of the track conditions didn’t deteriorate significantly and the two-year-olds ran 1:06.50 which was the fastest of the three 1100m races on the day.

Cellsabeel produced the fastest individual 200m splits for the last 800m of her event, putting the race away between the 400m and 200m (11.39, well over two lengths faster than anything else).

And she wasn’t stopping, her last 200m of 12.20 was 0.29 faster, almost two lengths, than runner-up In Flanders who was the best of the remainder coming from off the speed. Cellsabeel's last 600m of 35.31 was five lengths better than her rivals too.

When a two-year-old can run faster times than the older horses it’s a sign of some quality. 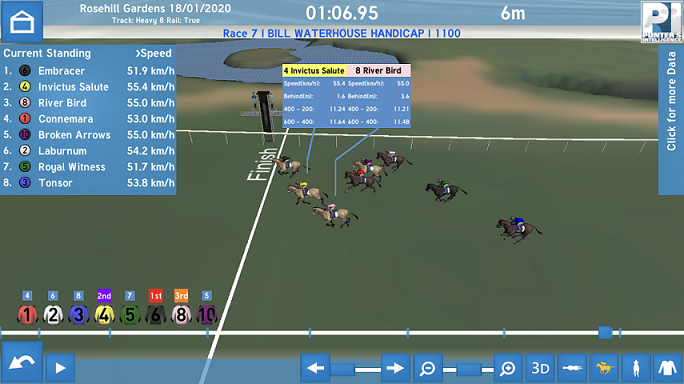 Embracer managed to control the Bill Waterhouse Handicap (1100m) to his liking but it was hard to miss the effort of third placed River Bird.

Given River Bird was some 21m off the lead at the 700m her effort to be beaten 1.5 lengths was a sign she’s come back in superb order.

Her form says she’s yet to win second-up but she’s placed in three of her four second-up attempts and any sting out of the ground is a plus for her too. The racing style is a bit of a worry but she did draw the outside and stepped a shade slowly on Saturday.

The run of Invictus Salute also had merit, she was also on the back foot at the start and was used up a little more than River Bird to be in front of a few settling.

It was mathematically impossible for Stella Sea Sun to win the NSW Bookmaker Co-Operative Handicap (1350m) once she bumped with Jen Rules at the start and went back to last.

Stella Sea Sun easily clocked the fastest last 600m of 35.46, more than two lengths faster than the next best, and she’s clearly not a horse that can sustain a long run from the back given her last 200m of 12.41 was only fourth best.

Must forgive the defeat, this might have been a race that got away.

Costello figured in the placings for the first time in his career when he was narrowly defeated by Bandersnatch in the Rosehill Bowling Club Handicap (1500m) and it could be a sign he’s in for a successful campaign.