There’ll be plenty of wins in store for imported galloper Mister Belvedere if his slashing Sydney debut at Rosehill on Saturday is any guide – and it should be.

Punter’s Intelligence sectional data shows just how impressive the gelding’s fourth place behind the heavily backed So You Win was and considering it was just his second start in Australia he’s all upside.

Mister Belvedere produced easily the fastest last 600m of the 1800m event, running 34.35 which was about a length and a half faster than the winner.

Trainers Ciaron Maher and David Eustace have a handy middle distance performer on their hands here and once he gets to 2000m and beyond he’ll be very hard to beat.

Sam Clipperton was on board Mister Belvedere and he produced a masterful front-running ride on Passage Of Time as he led all the way over 1300m.

He made a beeline for the front running 19.69 for the first 300m then managed to steal a couple of 12 second-plus sectionals before picking up the pace.

His last 600m of 34.14 was two and a half lengths slower than runner-up Asterius but the damage was done long before the 600m.

Given the rap on the last winner Kapajack, who scored easily over the same trip, it’s worth noting Passage Of Time ran 0.31 faster in winning and still managed to run home in faster time.

Out of the Kapajack race the run of third placed Destiny’s Own is worth a mention, he settled well back, which is unusual, from a wide gate and ran the fastest 200m for three of the final four 200m splits. 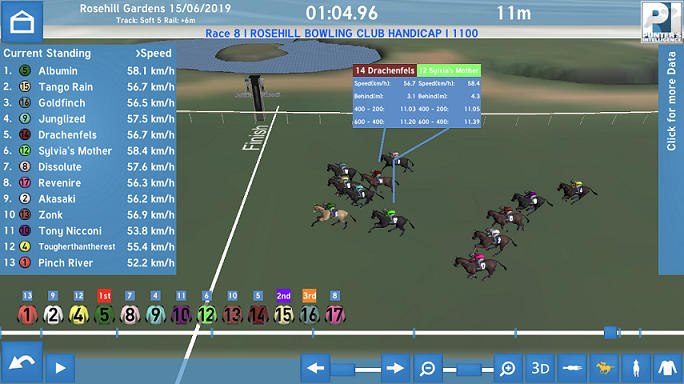 All eyes were on the hot favourite Sylvia’s Mother in the Rosehill Bowling Club Handicap (1100m) and while she was beaten she still ran 33.93 for the last 600m.

She’ll be well found again when she’s produced second-up but it’s worth keeping on the back of Drachenfels, who finished right behind her, after he again had no luck.