He smashes the clock just about every time he graces the track and so it was with Exceedance despite his defeat in the Run To The Rose at Rosehill on Saturday.

It wasn’t an easy task to make ground on a dry deck with the rail out so there’s a case to be made to add that little extra onto the finishers.

The Punter’s Intelligence sectional data from The Run To The Rose (1200m) shows us the first four colts home will all be a force come the Group 1 Golden Rose (1400m) later this month.

We’ll zero in on Exceedance first, though, as he posted the day’s best final 600m of 32.59 as he ran third behind Bivouac.

Bivouac rode the speed and while that was a plus on the day his effort shouldn’t be undersold. The leader Hightail ran out his first 600m in 35.72 which was 0.76 quicker than the older mares in the Group 2 Sheraco over the same trip.

And the first four across the line all sprinted faster than the mares resulting in them running well over a second faster overall time.

Runner-up Yes Yes Yes ran 32.84 for his last 600m and he will no doubt benefit from the run under his belt, and perhaps the 1400m coming up. Kubrick, in fourth, is definitely looking for more ground and his final 600m matched the winner though his last 200m was the slowest of the quartet. 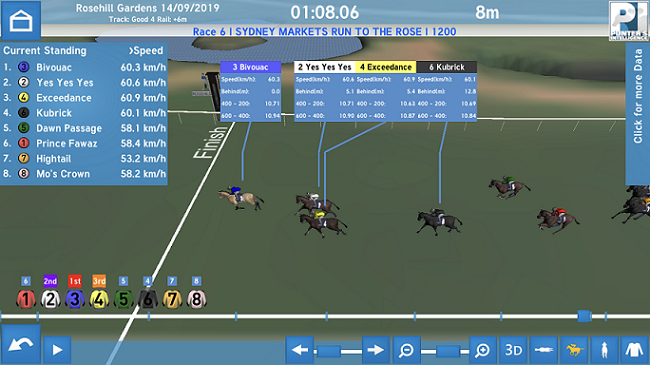 Also included in the Golden Rose picture is Castelvecchio who was hugely disadvantaged by the on pace pattern yet still scooted home into fourth in the Dulcify Stakes (1500m).

Whether he can sprint past the Run To The Rose first quartet, plus others, at 1400m remains to be seen but we can take out of his first-up run that he’s come back in good order.

The Sydney debut of star Perth mare Arcadia Queen lived up to expectation and while there were flashing light runs behind her let’s not overlook her effort.

She was first-up for almost 10 months in the Group 2 Theo Marks Stakes (1300m) and was able to settle fourth thanks to the inside alley. She posted the fastest section from the 600m-400m of 10.91 as she loomed on the leaders and while she did knock up late it was still a big win.

He has only won the one race largely due to that habit of drifting well back but if he happens to draw favourably one day don’t be surprised if he settles closer and puts a race away.

If three-year-old filly Catch Me finds another dry track in the coming weeks against her own age there’s a win in her surely after a slashing fifth in the Benchmark 88 over 1100m.

She turned second last and swung wide then produced a last 600m of 32.81, the only horse in the race to break 33 and well over two lengths quicker than any other runner there.