Amid the murky conditions at Rosehill on Saturday exciting galloper Master Of Wine confirmed his status as the rising star of Sydney racing with the sheer dominance of his Sky High Stakes win.

Punter’s Intelligence sectional data shows Master Of Wine’s last 600m in the 2000m contest of 37.64 compared pretty well to the sectionals run in the Group 1 Coolmore Classic over 1500m.

The five-year-old’s final sectional was more than two lengths superior to anything else in the Sky High and he ran a faster last 600m than the entire field in the Coolmore despite the extra 500m.

Only three horses in the Ajax Stakes, also at 1500m, ran a faster last 600m than Master Of Wine.

He looks an ideal type to transition to weight-for-age.

The runners-up from the Coolmore, Ajax and Phar Lap Stakes each produced the fastest last 600m of their respective races.

Miss Fabulass, who was thought to be a duffer in the wet, ran 37.97 which was just over a length faster than the other mares, Yulong Prince posted 37.27 while Probabeel clocked 36.05 in the Phar Lap.

The latter race is worth looking at and the run of Probabeel shouldn’t be understated. It was impossible for her to run Funstar down from where she was, in conditions she isn’t fond of. 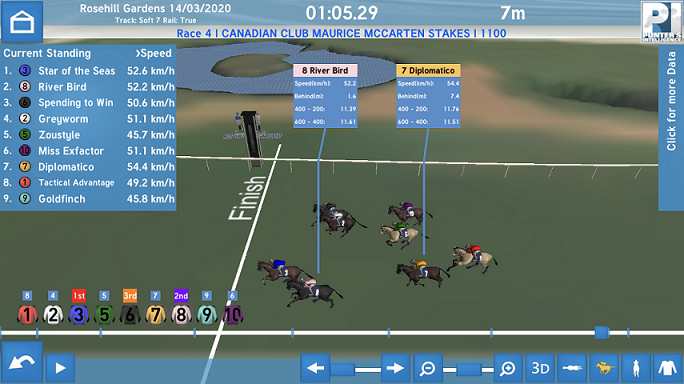 Funstar ran the fastest last 200m of the race of 12.37 while Probabeel still posted a respectable 12.40. If they clash again on a dry track it could be very interesting.

A couple of the beaten horse in the Listed Maurice McCarten (1100m) stood out.

It’s no surprise that River Bird posted the fastest last 600m of 35.47 (also the day’s best) as she charged home, she loves the wet and was race fit.

Diplomatico didn’t ever look comfortable, or much of a chance, at the back of the field but it was hard to miss his late surge at his first run for a few days over a year.

He’s still eligible for Benchmark races, with a rating around 81, and if he can strike a good to soft track at 1200m or so he can be very competitive.

There wasn’t a lot between the two two-year-old winners last weekend, even though the times give the points decision to the colts and geldings, as rain on the day made conditions more trying as it progressed.

Prague clocked 35.66 for his last 600m and was the fastest over the final 200m (12.46) in the Pago Pago, a race run about four lengths or so slower in the first half the fillies in the Magic Night.

So he was entitled to finish off. Mention should be made of the Hawkes-trained colt I Am Swerving who matched Prague’s final 600m but just felt the pinch late running 12.52 for his last 200m.

Third placed Jemss stamped herself as a contender for a race like the Group 1 Champagne Stakes over a mile as she clocked 36.37 first-up to be the fastest last 600m in the Magic Night.

And the run of Philizzy should be noted as well, she looked very strong late with her last 200m of 12.35 the fastest of the race and she was coming off a six week break.