It seems Rock is being set up to tackle the Group 1 $3m The Star Doncaster Mile second-up and he’s right on target after producing sizzling sectionals on returning at Rosehill on Saturday.

Although it may not have looked like it to the eye, the Ajax was the slowest run early of the three 1500m events so it’s no surprise they sprinted home significantly faster.

No knock on the winner I Am Superman who tracked the leaders and hit the front with a 10.97 from the 400m-200m, his best sectional of the race, before holding off the chasers. 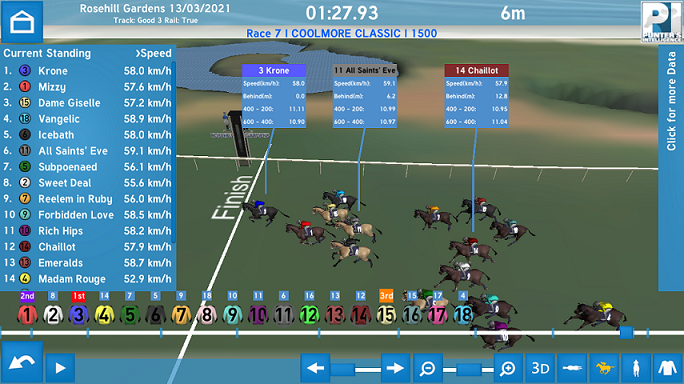 She was aided by barrier one and an excellent ride from Tim Clark and that allowed her the chance to unleash that race best final sectional. There were some hard luck stories in behind her.

A scrimmage early in the race caused Forbidden Love to check and that pushed All Saints’ Eve a pair further back than she was likely to settle.

And while Chaillot finished eleventh she clocked a 33.58 final 600m after being last at the 400m but they didn’t go nearly fast enough early for the backmarkers to be in the finish.

The two two-year-old races were contrasts in the way they were run with the Pago Pago winding up a clear two lengths faster overall than the Magic Night.

It was even more distinct in the first half with the boys running 35.42 for the first 600m while the fillies were over four lengths slower in 36.19.

So the run of Jamaea to dead heat for second in the Magic Night was a little better than it looked, she clocked a race best 33.63 for her last 600m and 11.41 for her last 200m after being a clear last on the turn.

The winner Shaquero was tradesmanlike from his inside barrier while Tiger Of Malay covered more ground (+4.9m compared to the winner).

But the eye-catchers on the clock were behind them.

Others to note from the meeting:

Nudge charged into fourth place in the Cellarbrations Handicap (1350m) with a race best 33.44 last 600m and 11.52 last 200m while Newhaven Park Country Championships finalist Charmmebaby was next best running 33.62 and 11.57 in eighth place.