It’s always a good sign when lightly raced two-year-olds record faster times than the older horses so there’s a lot to like about the debut of high priced colt Spend at Rosehill on Saturday.

The Punter's Intelligence data shows two-year-olds covered the 1100m in 0.22 seconds faster than the fillies and mares a few races later, that race won by Agent Pippa, and all honours must go to Spend.

The first 500m of the juvenile race was run in 30.79, almost four lengths slower than the fillies and mares (30.17) but the second half of the race is a completely different story.

Not many horses at Rosehill were able to break 12 seconds for each of the last three 200m splits.

Given he raced without an official trial in the lead up there’s only upside to Spend and the vibe is he will only get better over further than 1100m.

The runner-up True Detective deserves some credit, he didn’t give up the fight as Spend moved alongside him. He ran 34.96 for his last 600m but just couldn’t match his sprint.

He did fight back in the last 100m but the damage had been done by then. 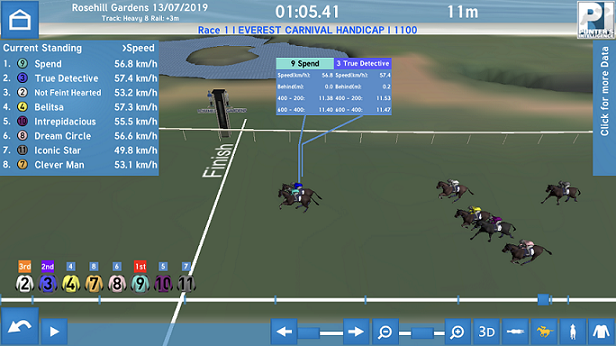 Agent Pippa looked to run her rivals into the ground in her 1100m but it was more a case of putting them all out of their comfort zone early because they crawled home.

Only one horse in that fillies and mares race broke 12 seconds for the last 200m and that was Gala Moshea who was first-up for a year and appeared to be only getting warm late.

The obvious horse to follow out of the meeting is Cyber Intervention after his slashing second over the 1500m.

He’s tracking towards a win and a mile and further is right up his alley.

There was some merit in the first-up run of Best Guess in the race won by River Bird even though his fading seventh might not suggest it.

He’ll be better for the run and expect him to be ridden more conservatively next time.

And good old Drachenfels has done it again, posting the fastest last 600m of his 1200m event in 35.25 to keep people interested in him for another start.