History says The Rosebud is not the form line to follow for next month’s $1m Golden Rose but, at Rosehill on Saturday, Dawn Passage made a compelling case that he could change that.

This colt races in a very un-Gai Waterhouse/Adrian Bott style, being a backmarker, but the Punter’s Intelligence sectional data shows he’s a strong backmarker and should excel over further than the 1100m.

At the 600m, Lucicello was about 4m behind Dawn Passage and with those faster 600m-400m and 400m-200m splits was able to just about draw level before her run came to an end.

When we last saw Dawn Passage he ran third in the Inglis Millennium behind Castelvecchio, a Group 1 winner since, and Accession, twice Group placed, and all indications are he’s improved.

What can we take out of Alizee’s narrow win in the Group 2 Missile Stakes (1200m)? 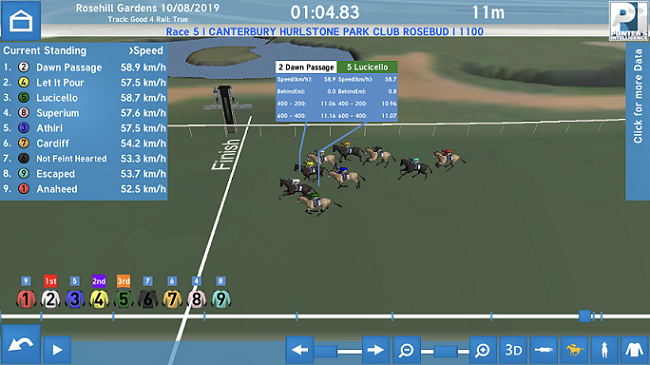 She didn’t post the best final 600m of the race, which is rare for a powerful finisher like her, as she clocked 34.50 to runner-up Invincible Gem’s 34.39.

But a lot of her work was done well before that as the slow speed forced her to take closer order much earlier than we’re used to – she ran the 800m-400m section in 22.71.

That’s almost two lengths faster than the next quickest, also the runner-up.

So it’s no surprise that Alizee didn’t have a whole lot left late, despite being given an easy time of it, and her final 200m of 11.84 was close to two lengths slower than Invincible Gem.

From a TAB Everest perspective, Alizee neither gained nor lost admirers given she was expected to win and win she did. Second-up will be more telling.

Out of that race there was plenty of merit in the first-up run of his stablemate Irukandji who ran his last 600m in 33.91 to claim fifth as well as sixth placed Oxford Tycoon who produced 33.85 for the best final 600m of the race.

Oxford Tycoon isn’t a noted backmarker so be wary of him if he draws favourably next time.