It’s a fine line between going fast enough on a leader to get control and slow enough to give yourself every chance and Blake Shinn rode that line to perfection on Trapeze Artist.

Punter’s Intelligence data shows he then backed off a little with 11.05 (1000m-800m) before rolling again and picking up the pace.

It meant runner-up Shoals conceded 10m at the 400m but Shinn had timed his run to perfection. He ran a track record time in front so running him down was impossible.

While all honours to Shinn and Trapeze Artist, be forgiving of Pierata. He may have finished fifth but he was ridden cold in a race that didn’t ultimately suit those tactics. 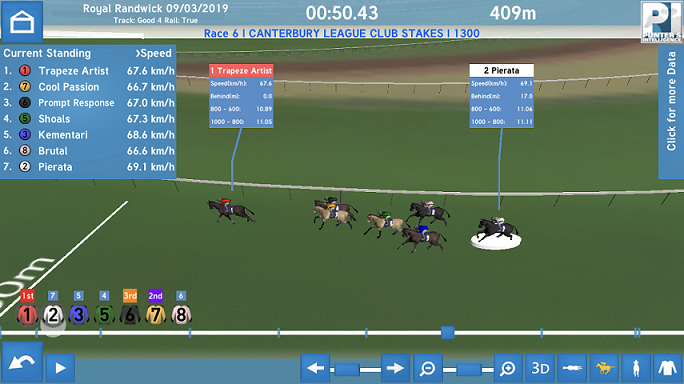 A points decision to the fillies in the two-year-old races looking at Tenley versus Yes Yes Yes.

Add that to the overall time and Tenley’s last 600m of 32.99 compared to Yes Yes Yes running 33.04 while there’s not a lot between them you’d have to give the nod to the fillies.

Plenty has already been written about The Autumn Sun’s amazing effort to win the Group 1 Randwick Guineas from an unlikely position.

At the 300m the colt was 20m behind Fundamentalist and by the 200m he’d only cut it to 14m but he flashed the final furlong in 0.52 faster than the runner-up.

It’ll be interesting to see if The Autumn Sun heads to the Rosehill Guineas (2000m) because most would be looking at Madison County as a big chance out in distance after his slashing fourth.

Trope was thrown in the deep end in the Fireball Stakes (1100m) and came out the other end stamping himself a talent of the future.

At just his second start he came from last and went around the field while the winner Prophet’s Thumb weaved through. Trope covered an extra 4.4m than the winner and ran 32.15 for his last 600m, 0.13 faster.

His current racing style isn’t conducive to winning all the time but he’s going to make the grade.

Sydney Cup contender Shraaoh had the flashing light on in the Randwick City Stakes (2000m) and he’s only going to get better as the distances increase.