Fast times were the order of the day at Randwick on Saturday and none went faster than TAB Everest contender Pierata as he rocketed into contention for next month’s $14m race.

The small caveat on the times out of Randwick is they are wind assisted but there were plenty of standout performances.

Pierata did have a conservative first 400m, running 24.62 (compared to the winner Redzel’s 23.88), so there was something in the tank for a finishing burst.

Amazingly, all six horses in the Concorde broke 33 seconds for their last 600m.

Redzel proved he is still in the mix for a third TAB Everest by taking his third Concorde and he did it with a level of control. 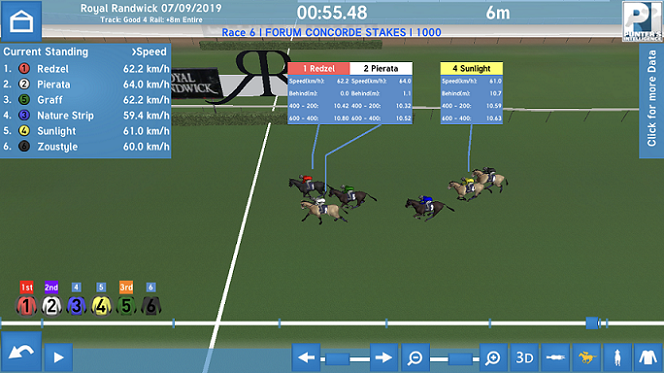 All eyes were on the boom filly Libertini in the Group 2 Furious Stakes (1200m) and while on face value her win wasn’t as impressive as many expected it was still a classy performance.

When compared to the Benchmark 78 1200m event won by Baller, Libertini’s win can’t really be knocked.

The race won by Baller’s first 600m was 35.76 while Villami carved out the same portion of the Furious in 35.87 (just under a length slower).

The overall times by comparison were significant as Baller ran 1:10.08 to Libertini’s 1:09.22 or some five lengths slower than the fillies (so a six length turnaround).

Libertini’s last 600m of 32.86 wasn’t the fastest overall in her race, though she was the strongest late with the quickest final 400m, that went to Let It Pour with 32.81.

Avilius had plenty of work to do in the Group 2 Chelmsford Stakes (1600m) and his effort to run second was huge given the pattern of the day.

He covered more ground than those in the finish travelling an extra 12m yet he still produced 33.64 for his final 600m.

The eye-catcher behind him was the staying mare Youngstar’s flashing finish, she held the fastest last 600m with 33.19 including a slick 10.81 between the 400m and 200m.

Out of the Group 2 Tramway Stakes (1400m) the focus was on the boom Kiwi Te Akau Shark and he didn’t let the side down despite being unable to catch Dreamforce.

The Chris Waller-trained galloper ran 33.43 and he covered an extra 7.1m in the run as he tracked wide throughout then made his move with Te Akau Shark. Don’t undersell him going forward.

Another Waller charge to stand out was Dealmaker, who ran fourth in the final event over 1500m.

That was his second eye-catching performance this time in so he’s just about ready.