Group One horses and a lightning fast track saw track records under threat all meeting on Randwick Guineas Day.

Only one was broken, but it wasn't broken, it was shattered. Eduardo edged out a brave Nature Strip in the G2 Challenge Stakes clocking an overall time of 55.20. Redzel had previously held the record with 55.73s!

It was on the back of a hectically run first half with James McDonald left with no other choice but to put the foot down on Nature Strip from the wide draw.

Take nothing away from the fighting qualities of Eduardo but the real Nature Strip has hit back with vengeance this autumn and is right on target for his defence of the TJ Smith Stakes over The Championships next month.

South Australian sprinter Bella Vella found herself in unfamiliar territory out the back of the field yet was responsible for the fastest last 600m split across the meeting (32.10s). 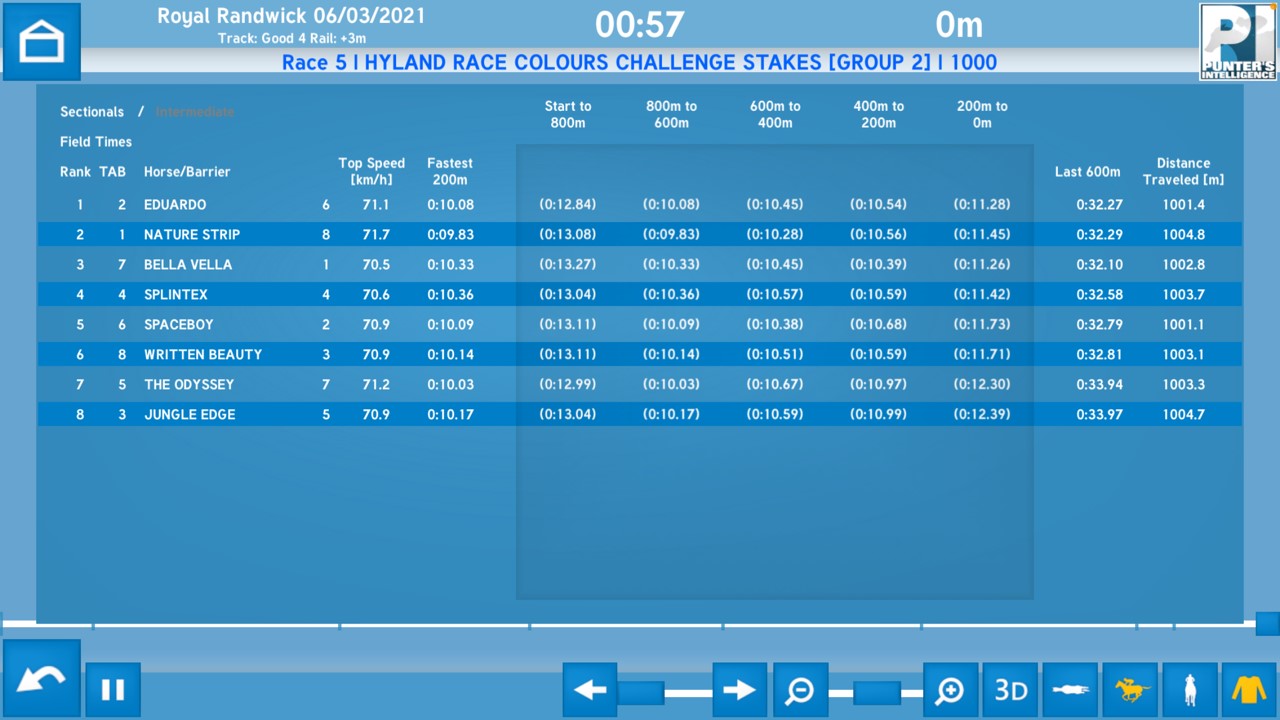 Meanwhile, there was an expectation that the Golden Slipper picture would become clearer after the Todman Stakes but what exactly did we learn?

Anamoe gunned down Profiteer, after the Mick Price-trained colt overraced in the middle stages, clocking 32.82s for his last 600m.

That puts the Godolphin youngster right in the Slipper picture, however, it’d be unwise to discount Profiteer given he was a month between runs. The same can be said for Stay Inside after he was forced back from the wide draw before finding trouble at the top of the straight.

Despite all that Stay Inside still clocked 32.93s for his last 600m, just half a length inferior to that of the winner.

The fillies in the Reisling Stakes ran an overall time 4.5 lengths slower than the colts with Glistening able to control the middle stages enough to never give backmarkers little chance.

Brad Widdup’s mare Vulpine bettered even the Todman overall time with a showing of sustained speed in the Wenona Girl Quality, leaving even money favourite Emanate without any excuses.

We are this far in and we’re still yet to talk Group Ones.

All honours go to Lion’s Roar in the Randwick Guineas, making a sustained run from the back of the field but with an eye on the 2000m of the Rosehill Guineas in a fortnight, it was hard to miss the luckless run of Mo’unga.

Held up for much of the straight, once he was finally clear he charged to the line to record a 11.38s final 200m, which was 1.5 lengths superior to the next best.

In the Canterbury Stakes, Savatiano got her Group One dues after her stablemate Bivouac made a mess of the start before doing too much work in the middle stages to find a spot.

Not many punters would have missed the close of Masked Crusader improving sprinter’s 33.08 last 600m there for all too see. Turns out he is a Group One class sprinter after all.

It’d be rude not to at least mention the outstanding return of Wild Ruler, carting the field up to tearaway leader Mamaragan with 59kg first up while She’s Ideel remains bang on target for a Sydney Cup tilt.