The merit in the wins of promising young gallopers Rule The World and Sir Elton isn’t in looking at the second half of their wins at Randwick on Saturday but the first.

Punter’s Intelligence sectional data reveals Rule The World’s first 300m of 19.33 was 0.20 seconds faster than the same section in Ljungberg’s win later in the day over the same distance.

The two-year-old went out almost two lengths faster than any other in his race before backing right off in the middle stages – in the other 1300m event the leaders kept running.

Rule The World stopped the clock 0.19 seconds slower than Ljungberg but ran 36.12 for his last 600m to Ljungberg’s 37.14 which is evidence the older horses worked pretty hard while the youngster had a picnic.

That adds merit to the runner-up Betcha Flying whose last 600m of 35.53 was more than three lengths faster than the winner and her last 200m of 12.08 is more than two lengths better.

While on the Ljungberg race, it’s worth noting the run of Shazee Lee into fifth place when resuming from a spell.

She loomed as though she was going to be in the finish, she ran the fastest 200m splits from the 800m to the 200m but her run noticeably ended late. Still, she clocked the second best last 600m of the race behind the winner in 37.29.

The raps on Sir Elton remain in place after he made it three from three winning over 1100m.

He didn’t look to relish the heavy ground but he was good enough to see off the challengers and, like Rule The World, he was entitled to stop after working late.

He ran his first 300m in 18.56 and didn’t back it off until Embracer assumed the lead from him midrace. It’s not often you see a winner run progressively slower sectionals for every split – usually there’s at least one where they pick up the pace. 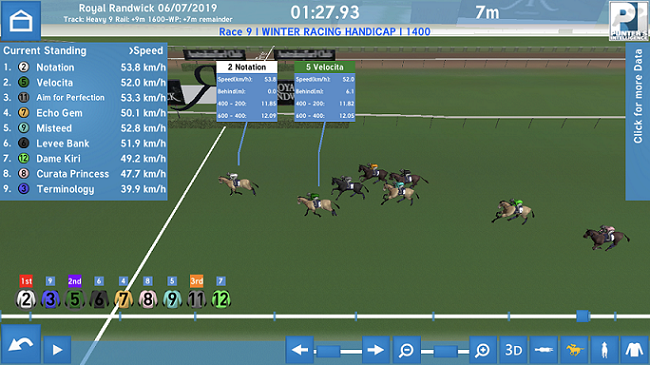 On face value Deity looked to have her chance but she clearly was struggling to make up the leeway in the heavy ground. So it’s interesting to note she ran the fastest last 600m of the day in 34.96.

It’d be no surprise at all if Notation kept up her winning run after she thumped her rivals in the closing race over the 1400m.

While to the eye all you can see is runner-up Velocita making up plenty of ground from well back – she ran the fastest 200m splits from the 1000m down to the 200m – it was a comprehensive win to the new Matthew Dale recruit.

Notation ran the fastest last 600m of the race in 36.59 and the best last 200m of 12.65 as she broke away late. She’s getting stronger and she has the racing style that will win her plenty more.