Gytrash laid his cards on the table in no uncertain terms to be a serious TAB Everest contender with a stunning display in the TAB Concorde Stakes (1000m).

The way the Concorde was run aided the gelding’s finishing sprint but it was there for everyone to see as he ran 11.39 for the last 200m, well outside the best of the day but also an illustration of how brutal the tempo was.

Ball Of Muscle and Nature Strip put on an almost identical first 600m of the race as they jostled up front, they ran the that second in 33.38 but they almost broke 10 seconds between the 800m and 600m running 10.03 and 10.05 respectively.

Both horses felt the pinch late with Nature Strip’s last 200m (11.90) run over eight lengths slower than his 400m-200m (10.70). He will improve with the run, as his form shows, but he was also said to be more forward than previous 1000m races fresh so did the race expose his Achilles heel?

It’s likely that Gytrash will head straight into the TAB Everest on October 17 without another run.

Worth mentioning are the runs of Dirty Work and Splintex who were largely overshadowed by the attention on the winner and Nature Strip.

Dirty Work almost stole second place from the favourite as he scooted home in 32.49 with his strongest burst a 10.54 between the 400m and 200m.

And Splintex, while beating one home, ran 32.86 for his last 600m which says he’s returned in good order as well. It’ll be interesting to see if they head to The Shorts and test out this form against the next lot of Everest hopefuls. 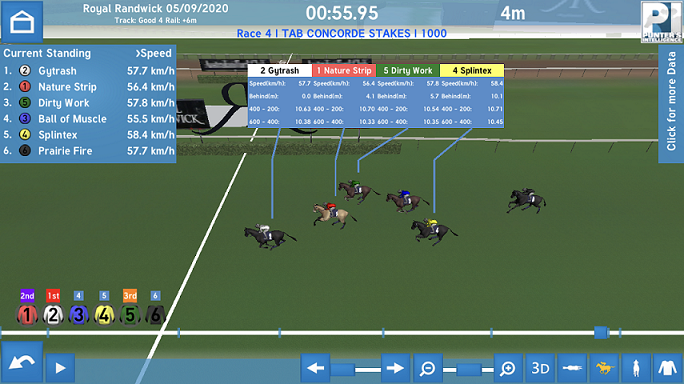 Plenty of attention went on the fillies in the Darley Furious Stakes (1200m) and while the flashing hung over the runner-up Hungry Heart take nothing away from the winner Dame Giselle.

The Snowden filly sat three wide throughout, covering 1.6m more than the runner-up, and gave plenty of cover to Hungry Heart but the pair clocked very similar sectionals at the finish.

How they fare over the 1400m of the Tea Rose Stakes in two weeks will be good viewing.

It was hard to miss the performance of Avilius in the Chelmsford Stakes (1600m) and he was clearly superior sectionally as he screamed home in 33.47 into fourth place, just under two lengths faster than the next best.

It’s a sign he’s come back in great order and he’s even better on a soft track so that’s an extra tick and come the Group 1 George Main if he draws a kinder gate may well be back on top.

Shared Ambition is worth noting out of the Chelmsford in a much improved second-up effort, while he finished ninth he ran the second fastest last 600m of 33.75 and a last 200m of 11.52.

We had a bunched finish in the Tramway Stakes (1400m), as it was in the Show County a couple of weeks ago, but away from the placegetters the runs of Rock and Vanna Girl read well on the clock.

Others of note on the day were Air To Air who ran a 33.76 to be the fastest last 600m in the Quincy Seltzer Handicap (1300m) and the perennially unlucky Icebath who ran a race best 33.32 into a close fourth in the Bisley Workwear Handicap (1200m).