It was a points decision to the colts over the fillies in the first two-year-old races of the season and both events produced youngsters to follow.

Global Quest won the Breeders’ Plate (1000m) in 0.35 faster than Every Rose won the Gimcrack Stakes (1000m) and a lot of that advantage came in the second half of the races.

Punter’s Intelligence sectional data showed the first 600m of the Breeders’ was just 0.07 faster than the Gimcrack then the boys scooted home much faster overall.

Outside that pair there are a couple who really stamped themselves as promising horses of the future.

In the Gimcrack that horse is Ticket To Ride, who charged home from last to run third with the fastest last 600m of the two-year-old races of 34.39.

That’s three lengths faster than anything else in the fillies division.

Out of the Breeders’ Plate the run of Barbaric was better than it might have looked to the eye, he also settled back and produced the best last 600m of the boys in 34.62. He was the only two-year-old to break 11 seconds for the 600m-400m section and while he flattened out late he’s worth remembering. 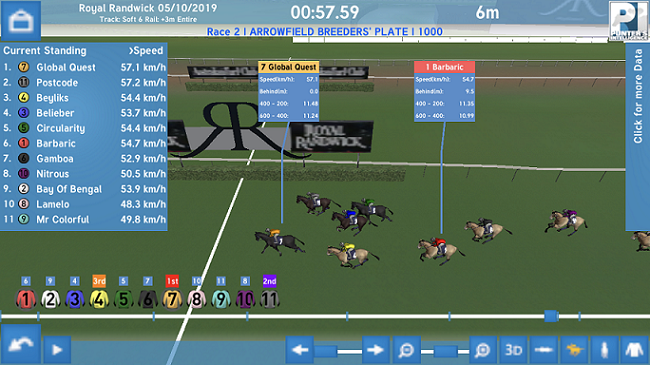 What do we make of Classique Legend from The TAB Everest perspective?

On face value the grey looked a little disappointing but he was responsible for the day’s best last 600m as he ran 33.93 and was the only horse all day to get under 34 seconds.

That says he ran well and perhaps the position in running is what cost him.

However, his last 200m is the concerning part as he only managed 11.73 and the first two home were stronger than him particularly Home Of The Brave who ran 11.62 to the fastest final 200m.

Take nothing away from Brutal, though, the decisive move from Tommy Berry came early as he put the four-year-old outside the leader running 10.89 from the 1000m-800m.

He was entitled to knock up a little being first-up but he still ran 34.02 for his last 600m and we wait and see if he’s snapped up for The Everest.

The effort of Verry Elleegant to win the Hill Stakes (2000m) looks even better sectionally than it did to the eye.

It’s not often a horse runs the fastest 200m splits for the last 1000m of a middle distance race but that’s what she achieved and, not surprisingly, her last 600m was lengths better than her opposition and she covered an extra 10.9m in the run.

Just under three lengths, she was the only horse to break 35 as she ran 34.82 and among those last five 200m splits she managed to run faster each time until the final 200m which was 11.43 and only 0.10 slower than the previous split.

Just about everyone’s horse to follow out of the Randwick meeting would be Reelem In Ruby who went down narrowly first-up in the Snitzel Sprint (1200m).