What level the Godolphin filly Tailleur will reach remains to be seen but she laid the platform to say she’s a potential stakes performer with a stunning first-up win at Randwick on Saturday.

The margin may have been narrow but Punter’s Intelligence sectional data underlines just how smart her win in the Grunt Standing At Yulong Handicap (1100m) was and why she should be followed.

Tailleur clocked the fastest last 600m of the day running 35.12 in the testing ground, first-up, chasing a race fit filly in Switched who’d had a decent level of control over the speed.

Switched is no slouch either and they had a five length margin on the rest of the field which is a good pointer to say the form will stack up.

It’s fair to say we saw another promising type in Travest who should lose no admirers for his late closing third in the Newhaven Park Handicap (1300m).

It was a mathematical impossibility for him to make up the ground the way the race was run considering he was some 30m off the leader after 400m and they hardly raced at a genuine tempo.

The leader Faretti ran the first 500m in 31.42 which was six lengths slower than Noble Joey (30.54) put the same section behind him over the 1300m later in the day in the race won by Handspun.

He’s a horse with plenty of talent and obviously a smart turn of foot who should continue to improve. 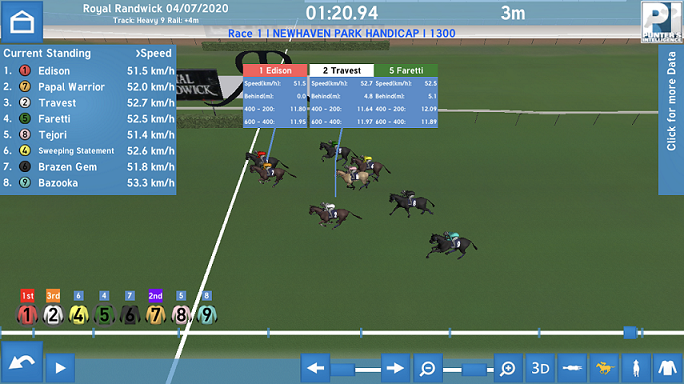 The win of Handspun in the Heineken 3 Handicap (1300m) was every bit as good as it looked on the clock as it did to the eye though as mentioned the tempo was a lot more conducive to horses coming from off the pace.

She ran the fastest 200m splits from the 800m to the finish and her last 600m of 37.49 was over four lengths quicker than her rivals and she was the only horse to break 38 in the race.

It’s worth noting the solid first-up effort by Greenspan in the same race, he’s not really a first-up performer and he ran the second best last 600m of 38.25 as he finished off into fourth late.

He was out of his grade and preferred distance range so it augurs well for the campaign.

There was merit in the run of Outback Diva into third in the Sky Racing Active Handicap (1400m) as she transferred her Rosehill heavy form to Randwick but the more significant factor was the run in transit.

She sat wide and covered an extra 7.7m in the run, comfortably more than those around her in the finish, and still ran the fastest last 600m of 37.65, just on two lengths better than next in line.

Fifth placed Zourhea was that next best with 37.96 and her effort to run on was promising given she’s better beyond a mile and most effective on firmer ground.

Sheer speed is Spaceboy’s ace card and he played it to great effect winning the Ranvet Handicap (1000m).

But his last 600m of 35.91 was a clear two lengths faster than anything else so it was a comfortable watch in the run home as they were never going to catch him.

Skara Brae is the take home horse from the TAB Highway (1000m) though the time in that race was some five lengths slower than Spaceboy over the same trip.

From Saturday’s Newcastle meeting, the Nathan Doyle trained Strawb again stamped herself as city class with a dazzling win in the Australian Bloodstock Handicap (1400m).