The future looks bright for promising three-year-olds Geo and Arousal despite their defeat at Randwick on Saturday.

Punter’s Intelligence sectional data from the Sky Racing Active Handicap (1300m) suggest they might be able to step up and be fringe carnival horses in the early stages of their careers.

Arousal clocked easily the fastest last 600m of the race running 34.66 which is over two lengths quicker than the next best, Geo’s 35.01.

Mark Newnham’s filly was as much as 21m off the leader, and winner, Discharged coming to the 800m and covered an extra 9.2m as she hit the line into fourth place.

She’s headed for a couple of stakes races around The Championships and on this performance in a strong three-year-old event she might well be up to it.

Geo looked the winner as he hit the front at the 100m mark and given he ran the fastest last 200m of 11.57 it’s probably a surprise he was beaten but perhaps inexperience came into play.

Like Arousal it was only his third start and he was coming off a midweek maiden win, plus the winner Discharged is no slouch either.

We shouldn’t undersell Discharged’s performance under the 60kg. He ran the first 500m in 29.54 which is about four lengths faster than He’s A Hotshot (30.19) completed the same section over the same trip later in the meeting.

So there were no excuses for He’s A Hotshot’s defeat, he had no answer to the sprint of Jen Rules who was the only horse to break 12 seconds for the last 200m (11.93) in that event. 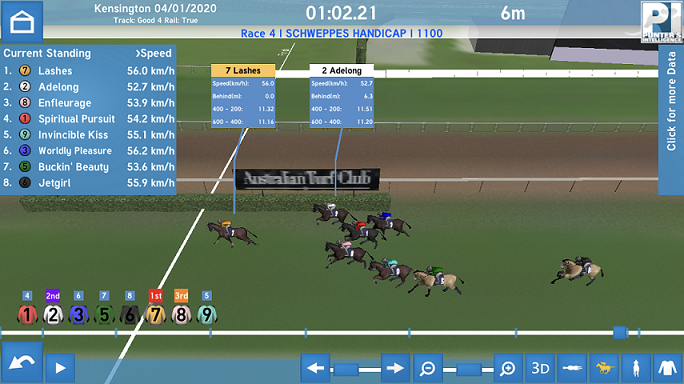 Lashes was a comprehensive winner of the Schweppes Handicap (1100m) first-up from a spell as she enjoyed a solid tempo up front before reeling off 34.32 for her last 600m, two lengths faster than anything else.

We might have seen a couple of smart two-year-olds fight out the Hyland Race Colours Handicap (1150m) in Philizzy and Osamu.

Of course Philizzy made a sweeping run from second last clocking 34.73 for her last 600m, just under three lengths faster than Osamu (35.17) who raced a bit keenly in the middle stages but did appear to be the winner early in the straight.

Rachel King produced consecutive front-running gems over the 1550m winning on favourite Mushaireb and outsider Mercurial Lad and it’s fair to say the latter did it tougher.

Mushaireb ran the first 550m in 33.24 which is leisurely compared to Mercurial Lad’s 32.59, about four lengths faster early. Overall Mushaireb ran two lengths quicker so his race became a sprint home while Mercurial Lad toughed it right out.