It’s often in defeat you find out how good a horse is and perhaps that was the case with promising colt True Detective at Randwick on Saturday.

The Punter’s Intelligence sectional data from the meeting, particularly looking at the four 1200m races, paints an interesting picture of the three-year-old’s performance despite being narrowly beaten.

Of the four 1200m events the NSW Trainers Association Handicap, for three and four-year-olds, was run in the slowest time and that was set up by a very slow first 600m run by Lifetime Quest who crawled along in 36.85.

So for True Detective to win he was going to have to sprint hard and have everything go right.

As it happened he was slowly out then ran 33.82 for his last 600m which was a length faster than the winner Misteed (33.99) but the difference was probably in the extra 2.7m he covered by having to swing wide on the turn.

The win by Mandela also showed he’s a strong chaser and after being tardy early and he had to reel off the best splits for each of the final four 200m sections, and overcome interference from inside, to win. 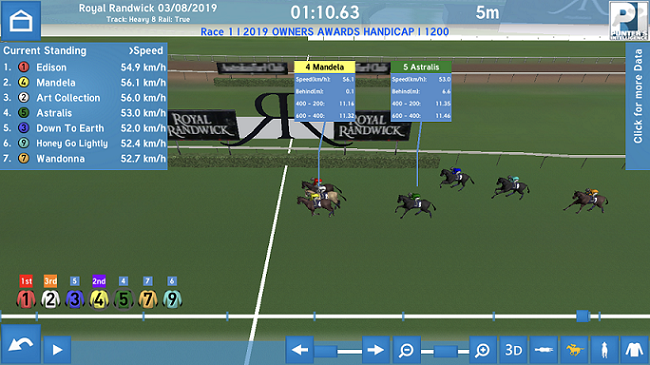 It’s worth noting that fourth placed Astralis, who copped a decent squeeze when the interference occurred around the 200m, was tracking along well compared to Mandela.

So to the win of Roheryn and as mentioned the time in his race, from the first 600m perspective, was also slow so he had to sprint home after being another not the best away.

The four-year-old was responsible for the fastest 200m sectionals in five of the six blocks with his last 600m coming in at 34.52.

It was a solid return especially considering he looked to have some upside fitness wise.

The run of Improvement rightly captured some attention and had she not been badly held up she would have clocked the fastest last 200m of the race.

Wouldn’t be too hard on Attention Run four her fourth placing up to 1800m.

That flat spot she hit first-up was evident once again but the difference being the pace wasn’t there to allow her to storm over the top of the leaders as she did a couple of weeks earlier.