Blake Shinn’s gutsy ride on Happy Clapper in the Chipping Norton Stakes has received widespread acclaim for taking the challenge up to Winx.

The Punter’s Intelligence data illustrates the moves Shinn made in his attempt to ride the perfect front-running race on a horse not used to leading.

Interestingly, the first 1400m of the Chipping Norton was run in faster time than the overall time for both the Surround and the Guy Walter, both high quality 1400m races, by over a second.

While it looked to the eye that Happy Clapper had stolen an interesting break on the field it all comes down to mathematics.

Winx ran her final 600m in 34.09 which was 1.15 faster than Happy Clapper or about seven lengths. She spotted him about five lengths at the 600m and won by two. 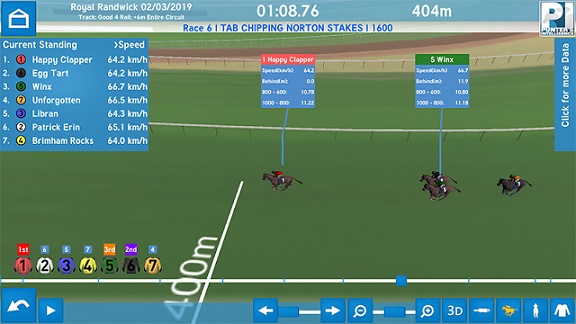 In the Guy Walter the stand out performance from a time perspective came from fourth-placed Dyslexic who clocked 33.01, the best of the day, for her last 600m.

She didn’t go around a horse, though, coming from last along the inside.

The hidden run out of the Surround comes from Miss Fabulass who again hit the line strongly from well back and while she beat only three home the times say she’s going better than her form will illustrate.

She ran 33.66 for her last 600m and did that going sideways at times in the straight. She could jump out of the ground next time if she can draw well.

Microphone clocked 0.41 seconds faster for the 1200m than Anaheed in their respective Golden Slipper lead ups the Skyline and Sweet Embrace Stakes.

There wasn’t a lot between them in the first half of the race, the colts ran 0.03 quicker, but the boys sprinted home significantly faster.

None of the fillies broke 34 seconds for the last 600m, sixth placed Amercement best with 34.13.

The eye-catcher out of both juvenile races though was Castelvecchio.

Meanwhile at Goulburn, all honours went to Al Mah Haha in the Country Championships Qualifier. The gelding covered more ground than any other horse (+12.1m) and still ran the third fastest last 600m of 34.89.