Dare we say they are Winx-like sectionals but they were produced by Te Akau Shark in his outstanding Group 1 win at Randwick on Saturday, a win that set him up as a potential star of the autumn.

Te Akau Shark was some 25m off the leader Dreamforce at around the 600m and it seemed it would take a massive performance to reel them in.

To almost break 11 seconds for that final 200m after doing so much chasing is an illustration the five-year-old is a real budding star, if he isn’t already.

He handles rain affected ground so there should be no fears heading to the Group 1 George Ryder Stakes (1500m) on March 21 and the Group 1 $4m Longines Queen Elizabeth Stakes (2000m) on April 11.

If there is some rain around then Avilius served warning he’s ticking along nicely finishing fourth with a sneaky last 600m of 32.79 – the only other horse to break 33 seconds.

They didn’t appear to be overdoing it on face value on the speed but perhaps they were as Dreamforce (34.54) and Happy Clapper (34.11) clocked the slowest final 600m splits of the race. 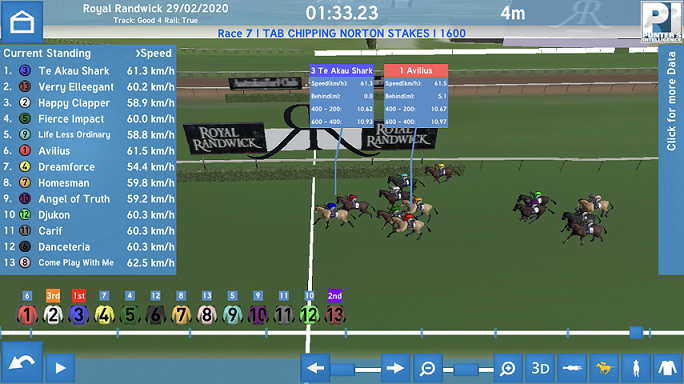 So it’s no surprise at all that Sweet Deal was left a little vulnerable in the closing stages and highlights how big her performance was in defeat.

The mares ran over three lengths faster than the fillies in the Surround where Probabeel clocked fastest last 400m of 22.13 as she reeled in Funstar who ran the quickest last 600m of the race of 33.34 (0.04 faster than Probabeel thanks to that filly’s flat spot before the turn).

Outside the placegetters Missile Mantra showed she’s headed the right way running 33.71 for her last 600m, the third best of the race.

The two two-year-old races were split by just 0.12 (just under a length) but the tale of each individual race was very different.

The fillies in the Sweet Embrace Stakes ran the first 600m in 34.72, close to three lengths slower than the colts in the Skyline (34.29) so their finishing splits look a lot more appealing.

Hungry Heart posted 33.92 for her last 600m, the only youngster to break 34, with her last 200m of 11.73 about a length and a half faster than runner-up Stellar Pauline who you’d say had her chance.

Mamaragan sat on the speed all the way in his debut win in the Skyline so his last 600m of 35.13 looks average. However he ran his first 600m in 34.35, expending a lot of his energy early, and his was a strong effort to keep going.

Third placed Aim struck some trouble in the straight and he posted the fastest last 600m in the Skyline running 34.90, perhaps he’s one to keep in mind heading to the 1400m of the Sires Produce.

One horse to take out of the TAB Highway over 1000m is fourth placed Foxie La Belle.

She was first-up for over a year and tracked very wide throughout the race but was hard to miss late running 33.41 for her last 600m.