It wasn’t only stunning to the eye, but Deprive’s last-to-first win at Randwick also produced a rarity when it comes to sectional times.

Sure the EML Handicap was an 1100m sprint but Punter’s Intelligence data shows the Godolphin gelding managed to break 11 seconds for every 200m split in the race.

Considering Rachel King had to do some ducking and weaving when making her run on Deprive it’s a huge feat to be ‘on’ for the entire journey.

Whether he can bounce off such a run second-up remains to be seen but his record is five wins from eight starts and his only unplaced effort was a fifth.

Another Godolphin four-year-old Taniko managed to produce the fastest last 600m of the day, running 32.42 albeit in a 1000m scamper.

But her effort was encouraging because her trials leading in had been underwhelming, even trainer James Cummings made that comment on radio on Saturday morning, so for her to charge home from last says she’s in good order.

Taniko will excel up to 1200m and if there’s a bit of rain around a soft track wouldn’t hurt her cause. 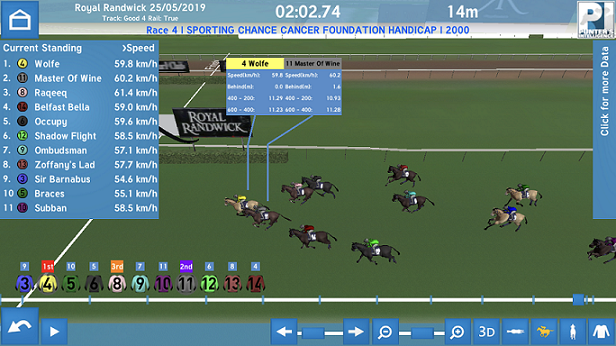 The only sectional the imported four-year-old was superior was the first 200m as he established his spot in front.

Another import Master Of Wine has his hoof on the till after chasing Wolfe home at his third Australian start and Sydney debut. He posted the fastest 400m-200m of 10.93 and just knocked up that last 200m 11.54.

There’s a win very soon in Sweet Victory after her eye-catching first-up effort behind Charlayne over an unsuitable 1200m.

She’s set to head to a 1500m event at Rosehill in June and she will be very competitive there.

A comprehensive win to promising two-year-old Prince Fawaz who recovered from a bump on the turn to whip home in 33.62 for his last 600m. That was a clear 0.6 seconds fastest than any other youngster.