The quality two-year-olds continue to announce themselves in the run to the Golden Slipper and Rulership was the latest to stamp himself as a youngster of talent with an impressive debut win at Randwick on Saturday.

And he won a race that promises to stand up looking at the runs of some of those left in Rulership’s wake.

Punter’s Intelligence sectional data shows Rulership clocked 33.43 for his last 600m after leading and the significant part of that was his last 200m of 11.35 which was the fastest of the whole day.

Only two two-year-olds posted faster final 600ms than Rulership and they were third placed Ticket To Ride (33.28), who ran the equal fastest last 600m of the day, and fourth placed Fayerra (33.36).

That pair were at the tail in the run and both have done an excellent job and it’s fair to say they both just knocked up late having to do so much chasing.

They both look to have talent and scope for improvement from their runs. 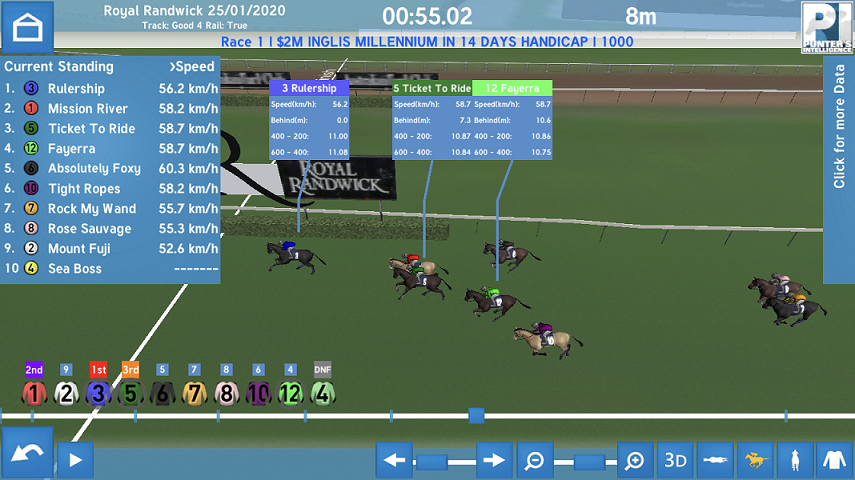 Mugatoo could well be an above average stayer after his first-up win over 1600m and the times suggest that he is.

Of the two mile races at Randwick his was the slower run early but faster overall so they really sprinted home and he was around 18m off the lead midrace.

He ran a last 600m of 33.54, two lengths quicker than the next best, and clocked the second fastest last 200m of the day running 11.37 and this over a distance a long way short of his best.

Stablemate Our Candidate posted the second fastest last 600m of 33.91 and he ran on nicely into third place first-up since running third in the Newcastle Cup, showing he has come back in good order.

Both winners of the TAB Highway races are headed for Country Championships Qualifiers in the near future and on individual splits there wasn’t a lot between Mr Wong and Hellenism.

Mr Wong’s Highway was run about two lengths faster overall than the race won by Hellenism.

Hellenism, coming back in trip from a first-up win over 1205m, conceded as much as 17m coming from last in her race while Mr Wong was always handy in the first four in running.

Promising three-year-old Pandemic ran right up to expectation in beating the older horses in the Benchmark 78 over 1100m.

The Godolphin galloper’s overall time was more that five lengths faster than Mr Wong’s Highway and he ran a slick 33.56 for his last 600m, just under a length faster than the next best.

He’s ready for the step up in class while gelding might have been the making of third placed True Detective who clocked the fastest last 200m of 11.67 as he charged home late.