Whether Libertini takes one of the remaining slots in the TAB Everest is a matter for later on but she certainly made a compelling case with a sizzling first-up win at Randwick on Saturday.

The filly with just three starts under her belt prior to the Silver Shadow Stakes stopped the clock within range of Santa Ana Lane’s track record for 1200m and he’s the TAB Everest favourite.

Libertini stopped the clock at 1:07.93 and Punter’s Intelligence sectional data showed her last 600m was a slick 32.74.

But the most dominant part of her race was the final 200m of 11.07, best of the race, and she appeared in cruise mode.

Mention has to go to the runner-up Flit who ran the best last 600m of the race in 32.55 and she was responsible for the fastest 200m splits from the 800m to the 200m before her run just ended slightly.

Let’s line Libertini’s race up against the Group 3 Show County Quality over the same trip won by Deprive in 1:08.63 – more than five lengths slower than the fillies race.

Godolphin’s Cascadian clocked the fastest last 600m of the day in 32.31 in running fifth in the Show County, that’s 2-1/2 lengths faster than Libertini.

But on the whole, Cascadian was entitled to sprint home faster given his first 600m of 36.39 was well over a second slower than Libertini (35.08). 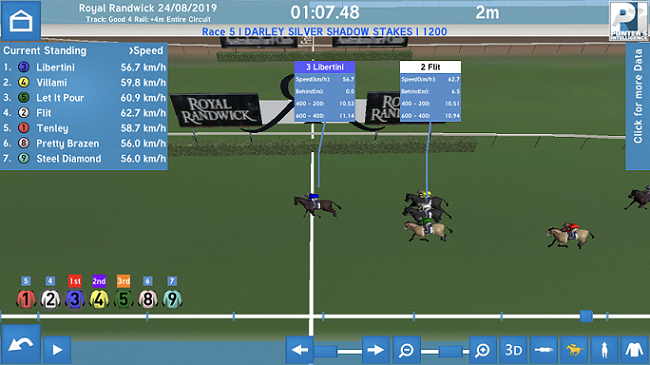 Deprive’s last 600m of 32.73 compares well with Libertini’s though as mentioned his race was run much slower early on. His last 200m of 10.96 was enough for him to scrape home.

Midrace, Trope was some 17.5m behind the leader and about 8m behind Deprive.

The masterful front-running ride by Tim Clark on Samadoubt in the Group 1 Winx Stakes (1400m) deserves some attention.

With that in mind then the run of Avilius had plenty of merit, he posted the fastest last 600m of the race of 32.85 which included the fastest individual 200m splits for that last 600m.

At the 800m, Avilius was some 23m off Samadoubt and he was still about 14m behind at the 200m so it was mathematically impossible for him to win.

A couple more to mention, Our Candidate clocked 33.38 for his last 600m in the staying test over 2400m where he once again showed he’s well above average.

Dealmaker’s first run as a gelding was a promising one, he ran a race best 33.00 for his last 600m running third in the final event over 1400m, he ran the fastest 200m sections for four of the last five 200m splits.