His claim to fame so far is a Group 1 second to Winx back in 2018 but a super return from an extended break suggests Invictus Prince is poised to break his Australian duck this time in.

Punter’s Intelligence sectional data reveals the seven-year-old clocked the fastest last 200m of the entire day (12.09) in running second in the At Sea Handicap (1100m) at Randwick.

He was also responsible for the fastest last 600m of the race, running 35.54, as he charged home into a close second to Coruscate.

It was a promising return from over a year off the scene, he’ll appreciate getting out over a bit more ground having proved himself competitive up to 2400m in the spring of 2018 which kicked off with that second in the Winx Stakes (1400m).

The winner Coruscate was always in the right spot in the race and given he ran 35.60 for his last 600m it was always going to be tough to catch him when he took control at the top of the straight.

What to do with Southern Lad? In the small field he found himself just over a length off Coruscate at the 400m and reeled off 11.45 to be the fastest between the 400m and 200m, only 0.03 quicker than the winner, so simply wasn’t able to outsprint him. 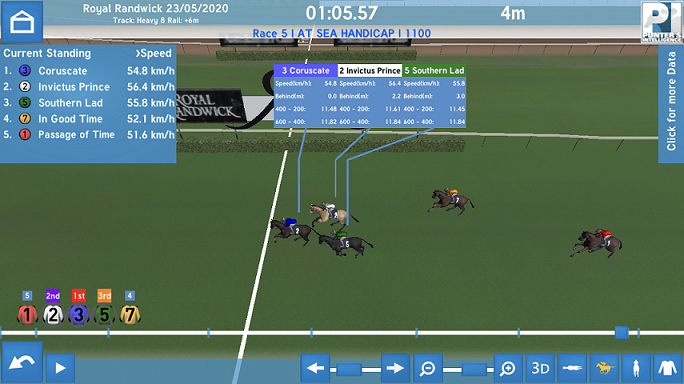 Exciting two-year-old Peltzer did it at both ends in making it three from three in the Darley Handicap (1300m) and set himself up as a live Golden Rose hopeful for the spring.

He established control of the race early, running 19.34 for his first 300m which was a bit over a length faster than his five rivals. He then managed to back it off to the tune of about five lengths in the middle stages and from there he was never going to be caught.

The favourite Overlord didn’t help his cause by flopping out of the stalls but he could only manage the third fastest last 600m of the race (36.20) and he felt the pinch that last 200m running 12.51.

There’s a city win in Joe Pride’s mare Threeood if her narrow defeat in the Sky Racing Active Handicap (1200m) is any guide.

Threeood has a 67 rating so Pride has a heap of options for her, Saturday’s race was a Benchmark 78, and she could be effective up to 1400m.

Longbottom signalled she could post a Sydney win shortly as she backed up a solid second at Randwick two weeks earlier with a best of the day last 600m (35.08) in running third behind stablemate Witherspoon in the Exceedance @ Vinery Handicap (1000m).

That final 600m was a clear standout on the day, she ran over two lengths faster than the next best in her race after conceding an impossible start on the turn.

The first five home in the Highway all ran faster raw time than the runner-up in the Benchmark 78 which isn’t a bad rap considering they ran 0.3 seconds slower in the first 600m of the Highway.

Runner-up Keen Power probably lost the Highway between the 400m and 200m where he was just held up slightly and then took a while to wind up while Biscara had a full head of steam.

And Glamour Cat ran the race’s fastest last 600m of 35.45 after being dragged back from a wide gate and tracking wide throughout.