Now’s the time for two-year-olds to make statements with the rich races looming and Stay Inside did just that with an impressive debut win at Randwick on Saturday.

It’s worth noting he sat third in the run behind Chameleon Choice and Scarzel and when he took over early in the straight the leaders weakened to run ninth and 11th respectively.

That strength bodes well for when Stay Inside heads into some of the established lead up races to the Golden Slipper.

There was merit in the debut effort too of runner-up Headliner who had an interrupted run before weaving through into second place. She clocked a 33.35 last 600m, and matched Stay Inside’s final 200m of 11.29, and being from the Chris Waller yard you’d imagine there’s upside.

The two TAB Highways over 1100m will have an impact on the SERA Country Championships Qualifier set down for Nowra on February 14.

Goulburn trainer Danny Williams’ stocks increased with the runs of Shelby Sixtysix and Southern Appeal who finished third in the first and second divisions respectively. 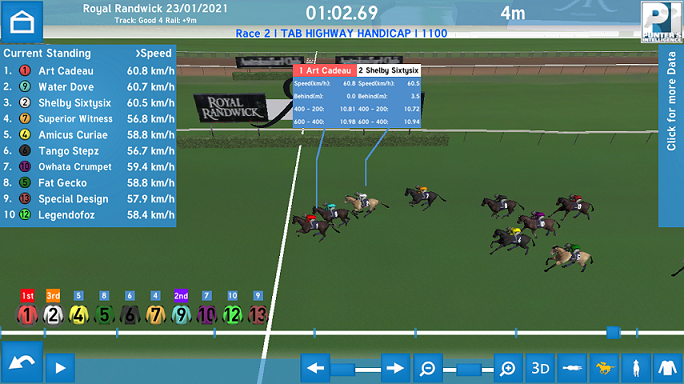 There will be improvement in him but the same can be said for the winner Art Cadeau who clocked 32.96 for his last 600m and ran the fastest last 200m (11.17). He was also first-up and has some established form around the 1400m of the Qualifier, and the win doesn’t cost him any extra weight.

The overall time in the first Highway was 0.05 slower that the second won by The First Of May. But they were run very differently.

In leading all the way The First Of May ran the first 500m in 28.75 compared to Superior Witness who led his division in 29.32 (over three lengths slower) so it was no surprise they sprinted home faster.

The Face was able to get a decent amount of control in the ANZ Bloodstock News Handicap (1100m) but the same can’t be said for beaten favourite Rule Of Law in the Bowermans Commercial Furniture Handicap (1100m) 40 minutes later.

After establishing the front, The Face ran his first 500m in 29.34. Rule Of Law was attacked on the inside by My Ruby and they ran the first 500m in 28.89 (almost three lengths faster).

Behind The Face it’s worth noting the placegetters Osamu (33.27) and Emanate (33.33) both ran well first-up with their respective trainers saying pre-race there was improvement to come from them.

Bandersnatch took the honours in the Listed Carrington Stakes (1400m) both from a result and clock perspective.

Thy Kingdom Come clocked that fastest last 600m, 33.77, showing improvement on his first-up effort in the same race as Bandersnatch while Order Again ticked over nicely for a wherever he goes next.

Plenty has been said about the luckless All Time Legend in the Drinkwise Mile (1600m), he did run the fastest last 200m of the race, 11.64, when he spotted a gap.