It’s hard to take anything away from Verry Elleegant’s performance in winning the Group 1 Winx Stakes (1400m) at Royal Randwick on Saturday.

She was aided by a strong tempo up front – Wolfe and Dreamforce put on 35.18 for the first 600m - but she made an early move, covered ground and sustained a long run.

Take nothing away from her, though two of her stablemates produced outstanding efforts.

Fourth placed Imaging was responsible for the fastest last 200m of the race, after being held up he ran 11.77 and his last 600m of 35.14 compares well considering his misfortune early in the straight.

Of the others in the Group 1, Con Te Partiro wasn’t disgraced as she sat on the back of the speed and ran 35.61 for her last 600m while Zebrowski warmed up late with a 35.79 final 600m at his first run back from a spell. 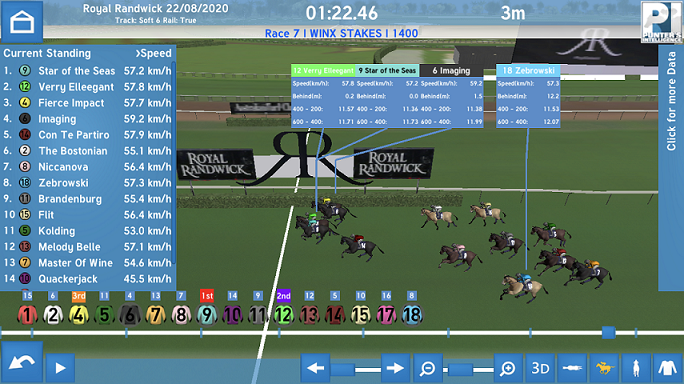 Not surprisingly the Winx Stakes was easily the fastest of the two 1400m events, and by some eight lengths, but there were some handy runs in the lesser class race over that trip.

The on-pacers had a lot more impact in the TAB Handicap so the runs of Yonkers and Kinane are worth highlighting – particularly Yonkers.

He produced easily the best last 600m of the race, running 34.38 into third place and looks in for a strong campaign over the middle distances.

It was a clearly superior run to that of his boom stablemate Kinane, who did work home well but Yonkers came from behind him and had more to offer late.

Kinane ran 34.73 for his last 600m, two lengths slower than Yonkers, and it will be interesting to see how much he improves with that run.

There was plenty of Kosciuszko talk around the win of It’s Me in the TAB Highway (1100m) and while it was only her second start and in a Class 2 the clock says she’s above average.

She’ll need to take the step to city company pretty quickly to prove herself to potential Kosciuszko ticket winners but she’s heading the right way.

It’ll be a surprise if Icebath doesn’t win a race or two this preparation after her excellent return in the Cactus Imaging Sprint (1200m).

She was responsible for the fastest last 600m of the race, 34.28, and the fastest individual splits from the 600m as she ran into a close second behind Zakat.

That last 600m was nearly a length and a half faster than the winner but the problem for Icebath was that she sat around two lengths behind Zakat at the 600m.

There were plenty of eye-catching runs in the Show County Quality over the 1200m, run over two lengths faster than the Benchmark race over the same trip, but it could be a head scratcher for punters with a bunched finish.

Add to that last placed Looks Like Elvis ran a last 600m of 34.40, fourth best in the race, as all but two runners broke 35 seconds.

Elsewhere on the day it’s worth forgiving New King for his unplaced run in the Heineken Handicap (1600m) considering the relatively easy time the leader and winner Frosty Rocks had up front.

Mo'unga was the subject of plenty of talk after his win at start two over 1400m at Newcastle, so much so he's now favourite for the Group 1 Spring Champion Stakes (2000m) later in the spring.

The three-year-old's overall time was over three lengths slower than the fillies and mares division over the same trip a race earlier but his finishing sectionals were outstanding.

His last 600m of 34.42 was four lengths faster than anything else in his race, last 200m of 11.23 better by a similar margin. He's two from two now and it'll be interesting to see him heading to town soon.