For the second time in as many starts Pierata has shown he’ll be a real force come the TAB Everest next month.

When he resumed in the Concorde over 1000m he produced sectionals unheard of with a 31.61 last 600m.

The Punter’s Intelligence sectional data confirms what the eye sees with Pierata, he also ran the quickest 600m-400m in 10.97 to be in a striking position in the five horse field.

From an Everest perspective he’s the clubhouse leader a month out from the $14 million feature.

Redzel burned early to establish his lead, after knuckling at the start, running the first 300m in 19.09 so it’s not a surprise that he was a bit soft late, a last 200m of 11.73, but the stable is adamant he’s on target for the Everest.

Graff clocked the second fastest last 600m of the Shorts of 33.39 and the fastest 400m-200m of 10.84 in finishing just shy of Redzel so he’s flying too and if it’s a bit more ground he’s after then watch out he doesn’t explode. 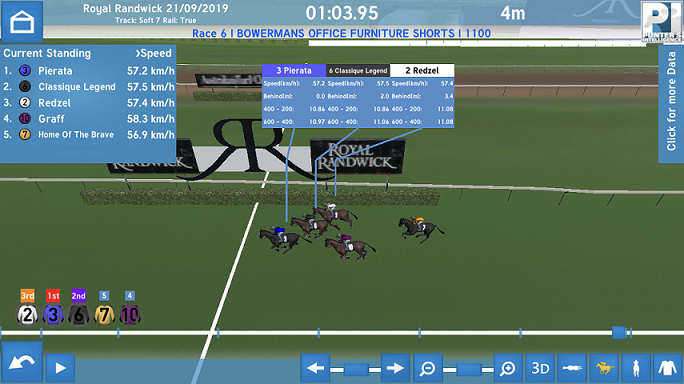 The shape of the three-year-old fillies picture changed with the result of the Darley Tea Rose Stakes (1400m) and Probabeel staked her claim as the horse to beat in the Group 1 Flight Stakes up to a mile.

She was beaten narrowly by Funstar on Saturday but her last 600m of 34.64 was a clear two lengths faster than the winner and a lot of that came in the last 200m.

She clocked 11.58 for that final split, the winner 11.88, and while you could argue Probabeel had an easier run she wants every centimetre of the 1600m.

Libertini wasn’t disgraced in running third, a lot of her hard work was done early on. She ran 10.80 from the 1200m-1000m before the speed backed off.

Whether she runs a strong 1400m remains to be seen later in the season but she was still the fourth best last 600m of 35.05 and don’t forget she was only beaten a head.

Dominant is the simplest way to describe the Group 1 Colgate Optic White Stakes win by Avilius over the Randwick mile.

Avilius ran the fastest 200m splits in four of the last five furlongs, necessary given he settled last and had to loop the field, but as the sectionals illustrate his turn of foot is a class above when he gets some give in the ground.

Out of other races, watch out for Dealmaker when he finally draws a barrier. He was almost 40m off the lead in the first half of the Shoot Out Mile and don’t undersell his effort in running seventh.

And whether it’s The Kosciuszko or another race in town, Super Star Bob showed he’s close to a win finishing second in the Schweppes Handicap (1400m) with a race best last 600m of 35.48.