Despite including a couple of horror stories, Saturday’s two-year-old event, won impressively by Excellent Proposal, promises to be a very strong pointer going forward.

The Punter’s Intelligence sectional data suggests if Excellent Proposal went into the race underestimated he came out of it a horse to remember.

Of the three 1400m races, the two-year-olds went out the slowest in the first 600m running 36.71 which was some three lengths slower than the Benchmark 88 and a full second slower than the Highway.

Excellent Proposal sat three deep in the second half and ran his last 600m in 34.52, about two lengths quicker than any other in the race, and he covered an extra 7m in the run for his trouble.

The defeat of Mandela as favourite again begs the question should he be forgiven, especially considering he didn’t have much of a crack at them from his inside alley.

He did run 34.85 for his last 600m while searching for runs and that was second best of the race so he’s not going badly. Depending on the race, he’s worth another chance.

War Baron might have been a hidden run in that he doesn’t have the profile of Mandela but his effort was just as good. As mentioned he ran 11.99 for his last 200m and his last 600m of 35.01 was third best.

Like Mandela, War Baron was held up for a lot of the straight but he managed to get to the outside late. He’s crying out for a mile. 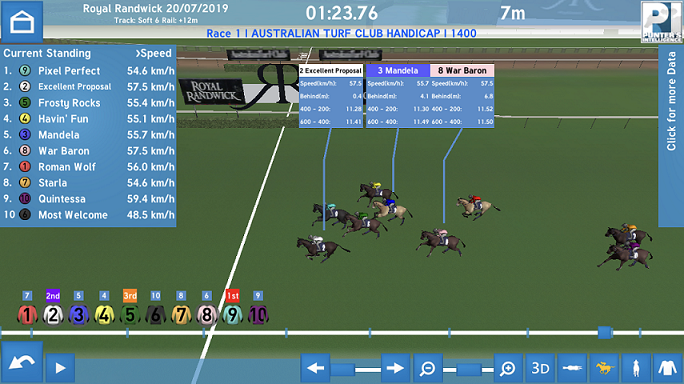 Costello, stablemate of War Baron, signalled he’s just about ready to win with an eye-catching second in the 1800m event at his second run from a spell.

The winner Dr Drill ran 35.48 for his last 600m but the damage was done as far as his rivals were concerned between the 1000m and 400m as he poured on the pressure with steadily increasing sectionals.

It’s no surprise that the 1000m scamper would produce the best splits of the day and that honour went to Taniko who clearly appreciated getting back into the soft range after floundering on heavy tracks.

Dagny is something of a poster girl for a few studiers of sectional times and it might be the case that the 2000m event on Saturday was the one that got away for the mare.

She lost the race in the first 200m it would seem as she ran 16.25 which was over two lengths slower than the winner Wu Gok. She was beaten half a length by that horse.