Scone beckons for emerging sprinter Brave Song after his superb return in a strong Group 3 Hall Mark Stakes (1200m) at Randwick on Saturday.

Punter’s Intelligence data illustrates how much better the four-year-old’s finish was as he produced the best last 600m of the day running 32.98.

Brave Song was responsible for the fastest 200m splits for three of the last four furlongs as he attempted to round up the entire field from the tail. He missed by less than half a length.

The overall time in the Hall Mark was 0.06 slower than the benchmark 1200m sprint earlier in the day, won by Top Striker, and the first 600m was 0.35 slower which highlights Brave Song’s effort to sprint home and break 33.

He’s likely to head to the Luskin Star Stakes (1300m) on Scone Cup Day next month. 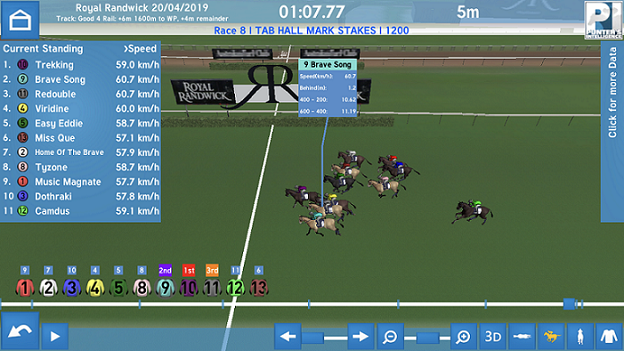 The Scone carnival could also be on the radar for Fierce Impact who was responsible for an excellent effort off a month’s break in the Group 1 All Aged Stakes (1400m).

He was coming back 100m on his first-up run and stepping up to weight-for-age and he might have been easy to miss as he slipped home in 33.39 for his last 600m.

Once again Osborne Bulls had to settle for second in a Group 1 race but his turn surely comes soon – he ran the fastest last 600m in the All Aged of 33.21.

There should be some form coming out the Group 3 Carr Stakes (1400m), won narrowly by Laburnum, with particular focus on the fillies finishing second to fourth.

Into The Abyss is headed for Scone and while her last 600m of 34.23 was slowest of the trio in question she was held up for quite some time and she did clock the equal best last 200m of 11.51 with fourth-placed Asharani.

Grey Lion was an upset winner of the JRA Plate (2000m) but he sprinted like a short courser as he ran 33.12 for the last 600m in a race that was a sprint home. So considering he came from second last at the 600m, he’s clearly gone up a notch or two.

If he can reproduce sectionals like that again there are more wins in store.

For the fifth time in his five starts Castelvecchio ran the fastest last 600m of a race as he charged away with the Group 1 Champagne Stakes (1600m).

He was the only horse to break 35 and his last 600m of 34.46 was more than half a second quicker than any other runner in the race. It’ll be interesting to see what he can do as a three-year-old.