It’s always difficult to find an excuse for an odds-on favourite when on face value they had their chance but Kordia performed so much better in hindsight than it appeared at Randwick on Saturday.

Slow times were the order of the day, illustrating how tough the conditions were, and Punter’s Intelligence sectional data shows Kordia’s second in the ATC Thank You Jockeys Handicap (1300m) had plenty of merit.

His last 600m of 36.84 was easily the fastest of the race, by two lengths, and that time was the fourth quickest on the day with the three faster times coming in the 1000m dash.

It could be significant that Kordia’s two previous runs this preparation were on Rosehill soft and heavy tracks and this was his first exposure to a Randwick heavy so be wary of where he turns up next as he’s clearly flying.

No knock on the winner Man Of Peace who did his prospects for the $1.3m The Kosciuszko no harm as he ran them into the ground and he did it largely in the 800m-600m section running 12.24 which was almost a length faster than the next best.

And he did clock that race best final 200m and when you’re a couple in front and do that you’re never going to be beaten. He does relish heavy ground and was previously proven on Randwick heavy. 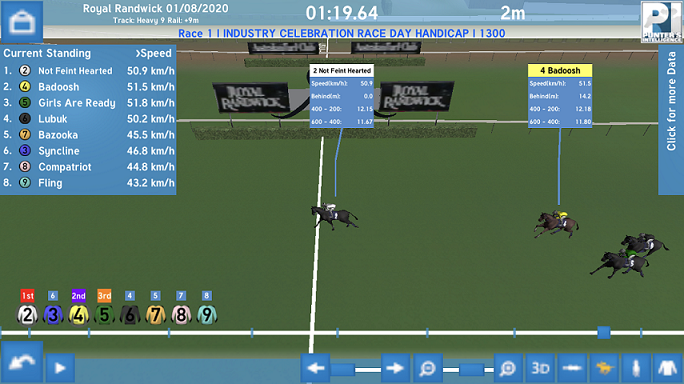 Matt Dunn’s Badoosh didn’t produce a race best sectional at any stage of the Industry Celebration Race Day Handicap (1300m) but given he was first-up on the testing track, his first in the wet, his run is worth a look.

He settled second last and was as much as 26m from the leader midrace and around 12m off the winner Not Feint Hearted at that point.

Inanup continued his excellent form and rise through the grades this prep taking out the ATC Thank You Stable Staff Handicap (1100m).

Given he came from off the pace, it’s no surprise he produced the fastest sectionals of the race running 37.69 for his last 600m and easily the best last 200m of 13.19 (by well over two lengths).

He’s a horse that should be followed and it wouldn’t surprise to see him measure up to something a little better in the spring, something like The Hunter or the summer sprint series.

One of the runs of the day, especially given how difficult the conditions made it to make up ground, came from Steel Diamond in the ATC Thank You Owners Handicap (1400m).

At the 800m she was 22m off the leader so it was virtually impossible for her to win, even though she saved some ground not pulling wide, but her last 600m of 38.02 was two lengths better than the next best in the race (Julian Rock 38.39) and her last 200m of 13.37 was also easily fastest.

A bit like Kordia, while she does get through the wet very well perhaps that very testing Randwick heavy isn’t her preferred wet ground.