Could we have seen the TAB Everest and the Kosciuszko winner at Royal Randwick on Saturday?

Certainly the wins by Classique Legend and It’s Me were dashing and visually impressive and Punter’s Intelligence sectional data showed the clock backed up what the eye saw.

Classique Legend’s dominant win in the Group 2 Shorts (1100m) was made even more eye-catching given he was badly held up until near the 200m before unleashing a blistering sprint.

His last 200m of 11.23 was two lengths faster than anything else in the high class field, his last 600m of 33.06 was also the race’s best and you’d imagine that would’ve been quicker had it not been for traffic.

Away from Classique Legend, Standout’s first-up fifth had plenty of merit.

The placegetters Eduardo and Bivouac sat wide in the run so their efforts had plenty of merit, Eduardo’s last 600m was 33.63 after being close to the speed while Bivouac, who settled midfield, kept coming in 33.19 in a solid first-up effort. 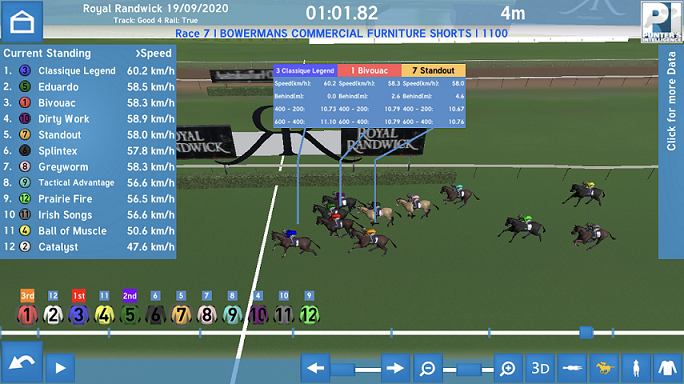 It’s Me firmed into favouritism for the Kosciuszko when she made it three from three in the TAB Highway (1000m) running the fastest last 600m and 200m of the meeting over the short course.

Such was her dominance over the Highway opposition, her last 600m was about six lengths faster than the next best which was fourth placed Leo (33.37).

She’s clearly better than country class, so the Kosciuszko will tell us more about where she stands.

The battle between the classy fillies Dame Giselle and Hungry Heart continues to be an interesting one and the Darley Tea Rose Stakes (1400m) made the score 2-0 in the Dame’s favour this spring.

Clearly there isn’t a lot between them, sectionals from the Furious were quite similar overall and it’s the same story from the Tea Rose.

When they get to the mile of the Group 1 Flight Stakes in two weeks it could well come down to the tempo and who gets the better run.

Criaderas was hard to miss in the Tresemme Handicap (1400m) as he charged from last into a close third running 33.51 for his last 600m, two lengths faster than runner-up Icebath (33.88) whose casual approach early continues to cost her races.

He was a well backed favourite there and you’d imagine the same will apply to his next appearance.

Bound To Win blew the start badly in the Quincy Seltzer Handicap (1200m) and finished the race in eighth place but you can mark her run down as a good one.

She clocked the fastest last 600m of 33.33, just under two lengths faster than the winner Athiri.

She’s unbeaten second-up so don’t mark this run against her.

There was a much improved showing from import Dadoozdart in the Group 3 Bill Ritchie Handicap (1400m), a race that was a sprint home.

Following three zeroes against his name he lifted to finish fourth and clocked a 33.42 last 600m, just 0.02 outside the race best by the winner Probabeel, and given he has won up to 2500m he can only get better over a bit more ground now.