What can you say, the eternally youthful Winx is not slowing down.

And she was only first-up.

Punters Intelligence data tells us the early stages of the Apollo was run relatively quickly with Tom Melbourne putting the first 600m behind him in 35.81 – the 1200m Light Fingers’ first 600m was 35.06.

Winx was in a striking position throughout the race, she was no further than 12.3m from Tom Melbourne in the run and that was around the 800m.

She ran that last 200m 0.4 seconds faster than any other horse with Happy Clapper next best at 11.60.

Outside Winx, the second best last 600m in the Apollo came from Unforgotten (33.65) which suggests her run was more acceptable than to the eye going into the autumn. 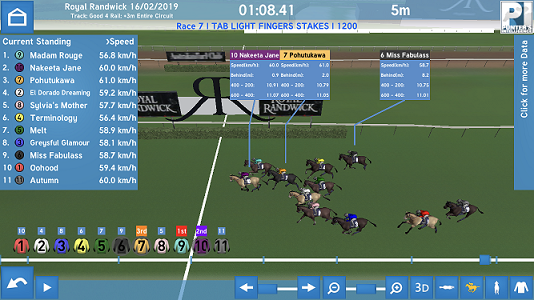 We’re set to see a number of fantastic clashes in the three-year-old fillies races after the Group 2 Light Fingers (1200m) won by Nakeeta Jane.

The winner received plenty of raps after the race, and rightly so, with her ability to sit handy fresh at an unsuitable trip then sprint and run down a smart filly like Madam Rouge.

Right behind them was Pohutukawa and she posted the second fastest last 600m of the day in 33.07, her effort made even better by the fact she was badly held up midway down the straight.

She’ll be even better at 1400m and she loves the sting out of the ground.

Of the three 1200m Group races the Light Fingers was the slowest from a first 600m point of view, second from an overall time view so it was a sprint home.

It probably didn’t look good to the eye but Miss Fabulass ran the second fastest last 600m of the Light Fingers of 33.28 so she can get a pass mark and next best were Nakeeta Jane and El Dorado Dreaming with 33.34. This was a strong race.

A few others worth noting out of Randwick:

Two-year-old Tenley conceded 17m around the 700m and was the only youngster to break 34 running 33.77 in winning the Pierro Plate.

All Cylinders was brave in the Pierro riding the speed, his first 500m was 28.65, while the co-leader dropped out. He’s headed for the Black Opal.

Paret did his usual tease clocking 33.75 for his last 600m, clearly the best of his race, as did Lanciato who ran 33.33 in the Southern Cross.