Plenty is expected of flashy Godolphin import Cascadian in the next couple of months and the chestnut signalled he’s a big race winner in waiting with an eye-catching resumption at Randwick on Saturday.

The Southern Cross was comfortably the fastest of the three 1200m events at Randwick, by almost a length.

Cascadian settled at the tail and had to swing wide to make his run, which in the context of the day wasn’t the ideal spot to be, and he loomed as a big threat running 11.13 from the 400m-200m.

What do we make of the beaten run of Libertini in the Light Fingers Stakes (1200m)?

The boom filly could only manage fourth placing behind Flit but given she was making her run out wide there’s a case to forgive her, particularly if she can get back onto a dry track. 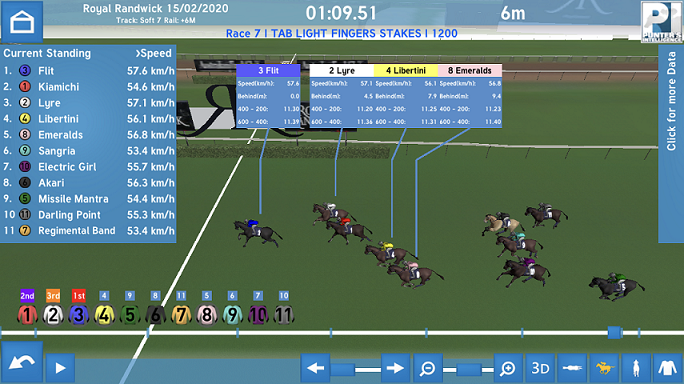 Certainly there were a number of runs around Libertini that suggested she will have to improve.

Interestingly, Flit ran the fastest section from the 1000m-800m to put herself in third place on the fence so it’s worth remembering now with the blinkers on she’s a lot more versatile than she’s shown without them.

Fifth placed Emeralds attacked the line nicely wide out running 34.61 for her last 600m and even the effort of Akari (seventh) clocking 34.95 wasn’t a had performance.

Golden Gift winner Dame Giselle was another short-priced favourite to go under and there’s also a case to be a bit forgiving of her third placing in the Lonhro Plate (1000m).

Dame Giselle did clock the fastest last 600m of the race of 34.16, a tick quicker than the winner Supreme Idea (34.18), so gets a pass mark from a Golden Slipper perspective.

The Lonhro was run some four lengths slower than the other 1000m event for older horses won by God Of Thunder.

We won’t be seeing She’s Ideel again for a few months at least but she’s a stayer of the future, don’t worry about the narrow margin in the Catanach’s Handicap (2400m).

Her last 600m of 34.85 was two lengths faster than anything else in the staying event, her 400m-200m of 11.33 was over a length faster and was still able to outpoint Dark Pearl in a dogfight to the line.

That pair ran similar times for their final 200m (just 0.01 between them) and they were four lengths superior to the rest of the field.

The Group 2 Apollo Stakes (1400m) served as an entrée to some of the autumn features and while all honours were with Alizee there were two mares just behind the placings who teased bigger things to come.

Verry Elleegant posted the race’s best last 200m of 11.68 as she followed Alizee home into fourth place while another ex-Kiwi in Danzdanzdance clocked the fastest last 600m of the race of 34.49.

Both mares excel at 2000m plus and with the sting out of the ground.