Do we just hand Anamoe the Golden Rose trophy right now? Given his first-up performance in Saturday’s Run To The Rose at Kembla Grange you’d be hard pressed to see how his opposition there could turn the tables.

Punter’s Intelligence sectional data showed Anamoe was the strongest at the finish of the Group 2 feature running a race best 22.54 for his last 400m including 11.62 for his last 200m.

When you consider the fitness he gave away and his dominance at 1400m in the autumn he surely has one hand on the Group 1 coming up on September 25.

In The Congo was brave up on the pace once again, he did the early work while being pressured by Stay Inside and still held on to run second. 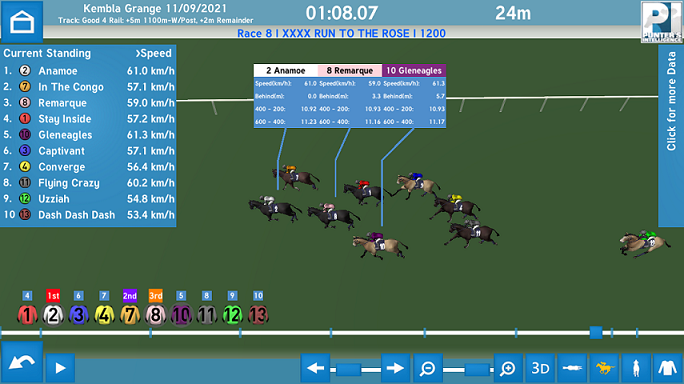 The Kiwi mare posted a last 600m of 33.47 in what was a solidly run race throughout, the first 600m of 35.57 was easily the fastest of those four 1200m races, first-up and off a setback so you’d expect plenty of upside to come.

It’s also worth noting the sectionals of Tailleur (33.48) and Forbidden Love (33.78) were sound and in the latter’s case suggestive she’s now looking for further.

The win by Count De Rupee in the Quayclean Handicap indicates he’s gone up a notch this preparation and enters calculations for a race like the Silver Eagle (1300m) next month.

It was something of a stop-start race, they were quick early then the brakes went on in the middle stages before a decent sprint home.

Count De Rupee was first-up with no official trials and ran 33.52 for his last 600m while both he and Poetic Charmer clocked the meeting’s fastest last 200m of 11.32.

The first 600m of 36.22 was significantly slower than the race won by Entriviere (35.57) yet at the finish there was only 0.12 between them, so the sprint home was solid.

Fans of Private Eye would have been more than satisfied with his performance in the Group 2 Theo Marks Stakes (1300m) despite the form guide reading he finished seventh.

He was responsible for the fastest last 600m of the race and second fastest of the meeting, 33.24.

The winner Chat did run a faster last 200m (11.33 vs 11.36) but with races like the Epsom and Golden Eagle as targets Private Eye showed he’s on track.

Arnaqueur is a $17 chance in Spring Champion Stakes markets and he’s right in the game based on his fourth place in the Dulcify (1500m) on Saturday.

It backed up a nice performance in the Ming Dynasty, the Jean Dubois trained galloper clocked easdily the fastest last 600m of the Dulcify 34.60 and his last 200m (11.53) was more than a length faster than the next best.

He shouldn’t be underestimated in races like the Gloaming and Spring Champion.