Hugh Bowman’s post-race comments about Profiteer might well be the key to the gun colt’s chances of adding a Golden Slipper to his Inglis Millennium triumph.

The champion jockey expressed that he’d like the to see colt switch off and relax, something he certainly didn’t do in the 1100m dash at Randwick on Saturday.

Punter’s Intelligence sectional data paints an unusual picture of Profiteer’s win and illustrates that he didn’t take a rest at any stage. There was nowhere to hide.

Despite having his foot to the floor throughout, Profiteer still ran the third fastest last 600m (35.50) so it’ll be interesting to see if that speed can be harnessed because it can be tough 1200m in a Golden Slipper.

For the second time in her short career Mistaken Identity caught the eye suggesting that more ground will see her produce her best. She posted the fastest last 600m of the race running 35.38 and the last 200m of 12.46. 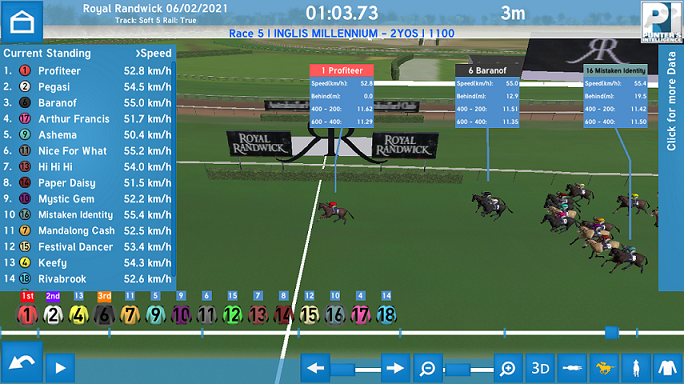 The two feature three-year-old races couldn’t have been run differently.

The Group 3 Eskimo Prince Stakes (1200m) was pedestrian while the $1m Inglis Sprint (1200m) was a much more brutal contest.

The winner Peltzer did post the race’s best last 200m of 11.99 so that sets him up well to step up in distance coming off a strong first-up victory.

North Pacific wasn’t aided by the slow tempo after settling well back, though in front of Prague, and his last 600m of 35.14 can be described as fair.

In the Inglis Sprint, more conducive to horses running on, Ole Kirk ran a race best last 600m of 34.43 and he was winding up nicely before clearly peaking.

Sky Lab announced himself as a potential Derby prospect with a comprehensive second-up win in the Agency Real Estate Mile (1600m).

While on Jamaea, she easily recorded the fastest last 600m of the Darley Lonhro Plate (1000m) running 33.80 or about two and a half lengths quicker than the next best as she flooded into second from near the tail.