Year after year, almost without fail, as the end of April approaches Chris Waller will produce a youngster who could be well above average and he did it again at Rosehill on Saturday in Saffiano.

The colt won the Clarendon Stakes (1400m), a race that can throw up a promising one in its own right, and he showed a rare ability to sustain a sprint as he mowed down Formentera late.

Punter’s Intelligence sectional data reveals Saffiano ran the fastest last 600m of 34.86 in the Clarendon and the breakdown of that sectional is interesting.

The two-year-olds did run considerably slower than their year older counterparts in the Hawkesbury Guineas over the 1400m, by about 15 lengths, but Saffiano was only having his second start.

From the Guineas, St Covet’s Spirit continues to put in career best efforts and she recorded the fastest last 600m of 34.06 as she ran into second in the Group 3 race.

Dawn Passage sprinted best early in the straight, clocking 11.15 from the 400m-200m, but St Covet’s Spirit closed strongly late running 11.76 to be the fastest last 200m.

She’s still won just the one race, and her rating is creeping up with successive Group 3 placings, but has her hoof right on the till. 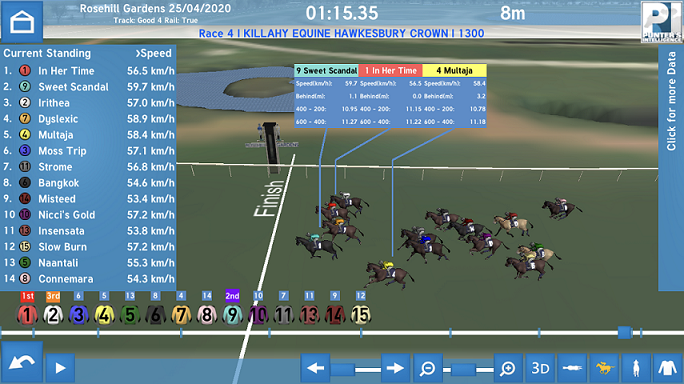 Sweet Scandal, not surprisingly, owned the fastest last 600m in the Hawkesbury Crown (1300m) as she sprinted home in 33.47 but the first-up effort of Multaja is worth noting.

That final 200m was 0.30, or almost two lengths, slower than Sweet Scandal who noticeably got away from her late but Multaja is open to more improvement you would think.

They could potentially clash in the Group 3 Dark Jewel Classic (1400m), usually run at Scone but to be conducted at Rosehill on May 16.

It wouldn’t surprise if the Scone Cup, run a day earlier at Scone, is the target for Live And Free after his first-up second placing in the Hawkesbury Cup (1500m).

It’ll be interesting, though, to stay on the tail of Aliferous who ran ninth but was responsible for the fastest last 600m in the race of 33.83.

With the Scone Cup run over a mile on the big track in the Hunter it could suit a mare like Aliferous more than the 1500m at Rosehill.

A couple of three-year-olds, eligible for easier races, worth keeping tabs on out of the 1500m Benchmark 78 are Impactful and Jetski who finished sixth and seventh respectively behind Grand Piano.

Impactful has only had the five starts and has a 66 rating, he drew wide and went back before running 33.96 for his last 600m which was a handy effort considering he hadn’t raced for a month and was coming back from the 2000m of the Rosehill Guineas.

Handle The Truth might have finished ninth in the Gold Rush (1100m) but the Kosciuszko winner produced the third fastest last 600m of 32.93 as he worked home from a position foreign to him at the back of the field.