If it wasn’t obvious to the eye, there was so much merit in the win of Creator in the TAB Clarendon Stakes (1300m) at Hawkesbury.

Punter’s Intelligence sectional data reveals the $1.5m colt did plenty of work in the run and the overall race time was superior to the two other 1300m events, including the Group 3 Crown, on the day.

The first 500m in the Clarendon was run in 29.12, the Hawkesbury Crown 29.83 and the benchmark 78 in 30.11 so considering Creator wasn’t far off the 1300m track record at the finish his performance is one of a very smart horse.

The Group 3 Hawkesbury Guineas turned into a two horse war between Military Zone and Trope over the last 200m and it’s the latter’s effort that deserves some attention.

He’s threatening to win a decent race, even though he’s only had the four starts, and Trope appears to have the scope to be well above average. 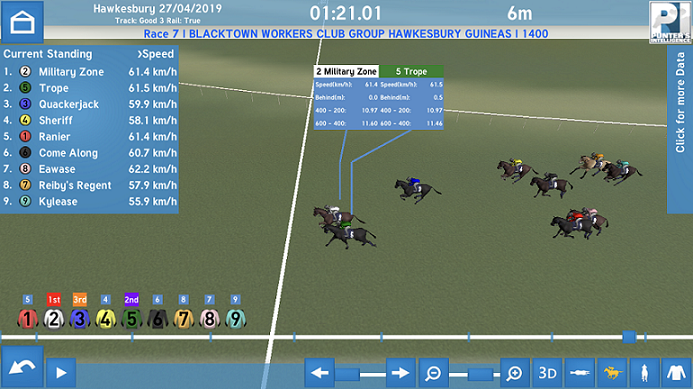 There was a lot more merit in the first-up run of Aqua D’Ivina in the Hawkesbury Crown than it might look to the eye.

She’s never won first-up, though had previously run three seconds, but is unbeaten second-up so no surprise to see her improve sharply.

It won’t be long this time in before So You Win picks up another race if his first-up effort over 1500m is anything to go by.

So long as the tracks stay on the dry side he’ll break through sooner rather than later and worth noting he’s never won first-up but has won two from three second-up.

And good old Tom Melbourne did his thing running second for the 12th time and he had the honour of clocking the fastest last 600m of the Hawkesbury Cup of 34.23.

A quick look back at the two two-year-old races at Randwick on Anzac Day and we saw a pair of smart youngsters break their maiden status.

Libertini ran the faster time overall, narrowly, as the fillies went out in 34.41 while the colts and geldings, won by Reloaded, were slightly faster early in 34.35.