One thing was clear as the stablemates Ole Kirk and North Pacific attacked the line together in the Group 1 Golden Rose (1400m) at Rosehill – Ole Kirk was just that bit stronger late.

Punter’s Intelligence sectional data showed the decisive section of the three-year-old feature was the final 200m and while we’re only talking split seconds Ole Kirk’s 11.66 was the race’s best and proved the difference.

North Pacific had clearly sprinted best early in the straight, while Ole Kirk had to do some traffic negotiation, and he ran up to win with an 11.21 from the 400m-200m but, and again it’s only a split second, that 11.67 is significant.

Ole Kirk only ran 0.27 slower in his final 200m than the 400m-200m section while North Pacific was 0.46 slower so the winner was stronger and that was decisive.

And not to forget King's Legacy, he did plenty of chasing in the middle stages clocking the fastest splits from the 1000m-400m and his last 600m of 34.52 shows he's on track for longer races.

It’s hard to assess the Golden Rose without wondering what might have been had Rothfire not sustained an injury in the run.

While they ran along in the early stages as Mamaragan kicked up to make Rothfire work his first 400m (24.20) was only a length faster than the mares in the Golden Pendant (Sweet Deal ran 24.40).

But looking at the first 800m, Rothfire ran 47.28 which was almost six lengths faster than the mares for the same section. 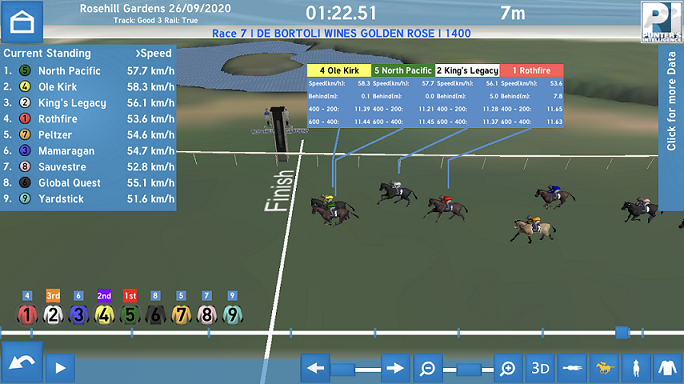 The overall time comparison between the two races had the mares running 0.02 faster on the line.

So it’s an interesting question, where would he have finished had he not been injured?

The Group 2 Golden Pendant (1400m) is another interesting race to dissect and you’d have to be forgiving of Haut Brion Her finishing out of a placing.

Her tale was told between the 1200m and 800m, that 400m was run in 22.45 (much faster than anything else) to assume the lead. While she did back it off sharply when she did find the front she simply worked too hard.

The fastest last 600m of the race was jointly held by Jen Rules (third) and Evalina (fifth) who ran 33.67 as they charged from the back.

And don’t overlook the run of Akari who may have finished tenth but she ran a last 600m of 33.71 so she’s ticking along well and perhaps wants a class drop.

The third of the 1400m events at Rosehill was the last and it was run significantly slower than the two stakes races and the minor placegetters, both first-up, are your two take home horses.

He and eventual runner-up Purple Sector both broke 11 seconds for the last 200m, Purple Sector ran 10.94 and Bottega 10.96, and both should have good upside.

Destination has a stakes win written all over him after his closing second to Wild Ruler in the Listed Heritage Stakes (1100m).

A race like the Group 2 Roman Consul Stakes (1200m) might be a good target, he’d run into Farnan there but regardless of where he heads he’s close to a win.