He’s been Sydney’s adopted son all spring and Gytrash’s stunning win in the Yes Yes Yes Stakes (1300m) at Rosehill on Saturday was as impressive sectionally as it was visually.

Punter’s Intelligence sectional data showed while the South Australian gelding didn’t post the race’s fastest last 600m (34.96) he was the quickest where it counted.

His last 200m was over two and a half lengths faster than the runner-up Haut Brion Her (12.27) so it’s no wonder he was able to swamp her when she was being hailed the winner.

A Concorde Stakes win, third in the TAB Everest and the Yes Yes Yes Stakes win have stamped Gytrash as one of our top sprinters.

Behind him there were a few runs worth noting from a trio of Chris Waller’s milers who were coming back in trip, likely with a view to tackling a race such as The Gong (1600m), for $1m, at Kembla Grange on November 21.

Imaging clocked the race’s fastest last 600m of 34.89 as he ran into third place; Star Of The Seas (back from 2000m) ran 34.98 to finish fifth after being last on the turn and even defending Gong champ Mister Sea Wolf wasn’t disgraced clocking 35.26 in sixth. 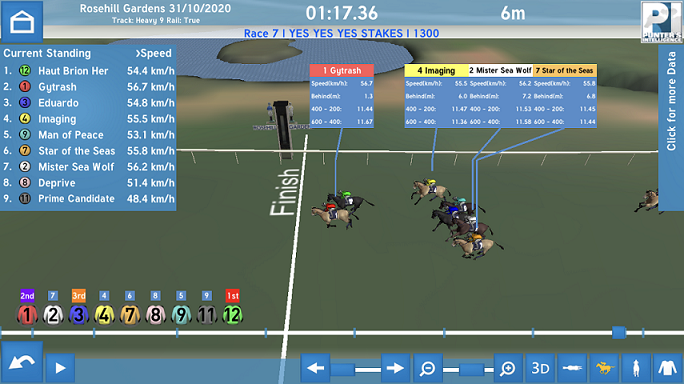 All honours in the $7.5m Iron Jack Golden Eagle (1500m) to the winner Colette who made the turn in 15th place but rounded them up for a narrow win.

Colette was at her top sailing down the outside while Icebath had a bit of traffic and though she ran the fastest last 200m of the race (12.04) the damage had been done.

Behind them the only other horse to break 36 seconds for the last 600m was WA galloper Superstorm who clocked 35.95 in running sixth and his last 200m of 12.25 was the third best.

Ellsberg has stamped himself as a promising colt with a gallant second in the Schweppes Handicap (1400m) at just his second race start.

The race was run incredibly slowly, the first 600m in 40.13, so it was no surprise to see them dash home. It was clear that Ellsberg was outsprinted early in the straight and it may have cost him victory.

It’ll be interesting to see if he progresses to the Group 3 Spring Stakes (1600m) at Newcastle on November 14, where he’s sure to strike much firmer ground.

She can be unlucky at times but Miss Einstein signalled she’s come back in good form with her close second in the Tresemme Handicap (1200m) where she posted the fastest last 600m of 34.87 and last 200m of 11.99.

Worth noting that Miss Einstein arguably should have won second-up last prep. Stablemate Bring The Ransom wasn’t far behind time wise as she ran 34.92 for her last 600m in a pleasing return.

Another Bjorn Baker mare She’s Ideel continues to produce outstanding sectionals but her lack of early pace is costing her races – she ran a last 600m of 35.41 in the Rosehill Gold Cup (2000m) to finish second.

No other horse broke 36 seconds and she was four lengths faster than the next best, the winner Costello (36.04). Shows how tough it is to be a backmarker!

Watch Punter’s Intelligence at the special time of 6.30pm on Monday on Sky Thoroughbred Central.