We all know Libertini is capable of running sizzling times when she strikes a good track and a truly run race and she found the perfect storm in the Group 2 Premiere Stakes (1200m) at Randwick on Saturday.

Punter’s Intelligence sectional data showed, not surprisingly, that Libertini ran the fastest last 600m of the race (33.51) and final 200m (11.64) as she stopped the clock just a couple of lengths outside the course record set in the 2019 TAB Everest.

That’s where we’ll see Libertini next.

A lot has been made of the early work Nature Strip had to do to overcome another casual break from the gates.

Nature Strip clocked a 9.97 between the 1000m and 800m and that’s got to be getting close to as fast as you can go. However, it’s worth noting Libertini ran 10.09 for the same section.

It’s more likely Nature Strip punctured due to the effects of the respiratory issue he was found to have post-race, though it never helps when you’re breaking clocks.

To Classique Legend, whose second place certainly cost him no friends for the TAB Everest.

An enormous run and he’s spot on for the Everest. 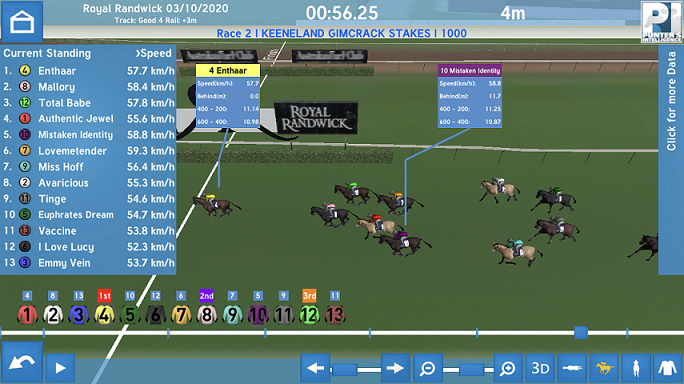 Plenty of attention was on the two-year-olds and it was Enthaar who proved to be the standout in the Gimcrack Stakes (1000m).

Her overall time of 57.06 was just over two lengths faster than the colts who ran 57.42 and she seemed to be in cruise mode at the finish.

The run of Mistaken Identity in fifth went largely overlooked but she’s well worth noting down for the future.

She was stuck back in the ruck coming to the turn and when she was clear worked home in 33.75 for her last 600m and 11.63 (last 200m) so not too far off the winner who everyone is talking about.

Shaquero won the Breeders’ Plate (1000m) from the front and when you’re running home in 33.78 you’re pretty hard to catch in anything.

The Snowden trio of Construct (second), Astrologer (third) and Kalashnikov (fifth) all ran faster last 600m splits than the winner so set themselves up nicely for the future.

It was a little tough to make ground in the Group 1 Epsom Handicap (1600m) and the first four home were in the top six on the turn.

So the efforts of Colette and Rock are worth highlighting for races further through the spring.

Reigning Kosciuszko champ Handle The Truth set himself up for a peak performance as he aims to defend his title in the $1.3m race on October 17.

He carried 60kg to a luckless sixth in the Cerrone Handicap (1200m) in a run that was quite similar to his effort in the same race a year ago.