It’s not often a two-year-old breaks 11 seconds for their last 200m, even in a 1000m race, so it makes the debut win of See You Soon at Randwick worth a good look.

Trainer Jean Dubois has a bit of form producing youngsters, a couple of years ago he took Aylmerton through to a Golden Slipper, and this filly announced herself as a live chance in the $1m Golden Gift (1100m) on November 9.

So for See You Soon to sprint home from second last at the 400m and clock a 32.89 final 600m is more than noteworthy.

She also posted the day’s fastest last 200m and was the only horse all day to break 11 seconds running 10.90, more than two lengths faster than the runner-up Dame Giselle (11.28) who didn’t look to be stopping.

We’ll find out in a couple of weeks whether she can back up such a promising debut.

The two stakes races run over the 1200m were vastly different contests from an early speed perspective but at the finish there wasn’t a lot between them.

The first 600m of the Nivison, as mentioned, was a fairly even 35.77 but the three-year-olds in the Crowley really scooted running 34.79 or some six lengths faster. 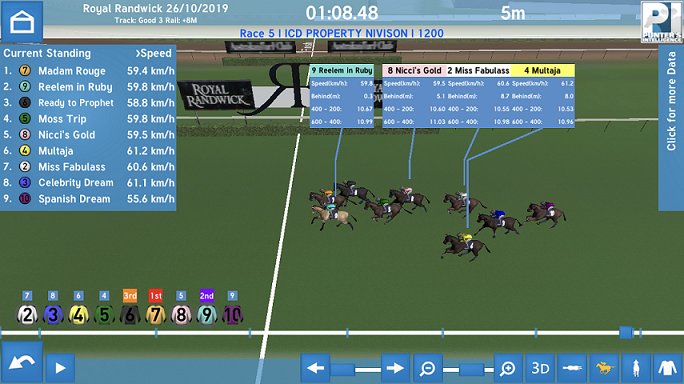 With that in mind it’s no surprise that the eye-catching sectionals from the second half of the two races came from the mares in what was just a dash home.

Of those the two to take home should be Nicci’s Gold, who posted the race’s best last 200m of 11.17 and has an imposing second-up record, and Miss Fabulass showed she’s getting back to form with 11.22 for her last 200m.

All honours went to Diamond Thunder in the Crowley and while they had the foot down for most of the race strangely first and second on the turn were second and first home.

He was strongest on the line too running 11.59 for his last 200m which was three-quarters of a length better than any other in the race and you could see that to the eye.

The $1m The Gong (1600m) at Kembla Grange on November 23 has emerged as the target for handy mare Luvaluva and her return on Saturday showed she’s on target.

She chased home the favourite Greyworm in the Filante Handicap (1400m) and she owned the race’s best last 600m of 33.87.

Everyone’s take home horse from the $1m Bondi Stakes (1600m) will be the runner-up Pancho who jumped from midweek grade to take on a horse with serious Group 1 form in Kubrick.