Zalatte is one name that we’re sure to hear more of in 2019 after she made it two from two in an outstanding performance at Rosehill on Saturday.

And Punters Intel data tells us why.

There were four 1400m races at Rosehill and the three-year-old event won by Zalatte shared the slowest first 400m with Sweet Deal’s BM78 mares race.

But overall the three-year-olds ran the fastest time of the four races and from the 1000m it was a dash home so for Zalatte to reel off a 33.55 last 600m from last underlines her potential.

This is a filly bred to be an Oaks contender in the autumn.

And it’s worth noting there were comparisons between Zalatte and this year’s ATC Oaks winner Unforgotten after the race, of course Unforgotten won a 1500m event on the corresponding meeting in 2017.

A somewhat hidden run in behind Zalatte was that of her stablemate Beidi who signalled he could be getting back to his best with a close up fourth. 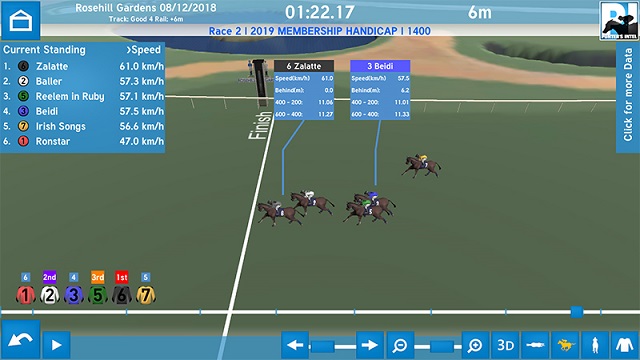 It’s rare that a horse runs the second slowest last 600m of a race and still wins and that was the scenario with all the way victor Irithea thanks to a masterful ride by Jean Van Overmeire.

There was no loafing in her 1400m event as she put down the first 400m in half a second faster than Zalatte but finished the race in almost half a second slower overall.

But that was the only breather as Van Overmeire asked the mare to slip away from the field to the extend that she was still 12m in front of the pack at the 300m.

It’s fair to say JVO got his timing right on the mark.

Another eye-catcher from the back was the somewhat enigmatic Redouble who produced a super effort under 62kg from an impossible position to run fourth at his second run back.

He’s ready to win but given he’s drawn poorly at his two runs back and had to concede starts he might need a favour from the barrier gods as it’s over 12 months since his last win.