Near the 700m of the opening race at Rosehill, Roheryn was some 26m off the leader and winner Chess Star.

The first 300m of the 1100m race was telling in the fortunes of the boom Godolphin colt as Chess Star ran 19.04 while Roheryn clocked 20.37 according to Punters Intel.

There were three 1100m races run at Rosehill - the three-year-olds, the Highway and a Benchmark 94.

In the latter, leader and runner-up Tango Rain ran his first 500m in 29.90 while Chess Star clocked 30.26 for the same section of his race. Chess Star was able to increase the tempo from the 800m to the 200m while Tango Rain’s sections slowed for each 200m split to the line. 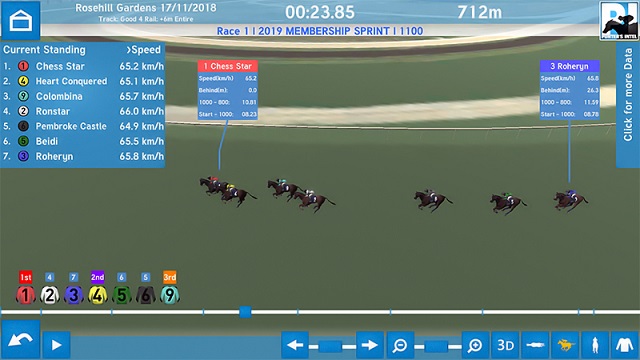 It was her first glimpse of form this campaign and she could go on with it.

Quality mare Seasons never looked out of second gear in her first-up win over 1200m and, curiously, she didn’t run the fastest split for any part of the race yet still recorded a slick 33.44 for her last 600m.

That was the second best of the race behind Nicci’s Gold who ran 33.24 and produced the fastest 200m sections for four of the six 200m splits including 11.18 for the final 200m.

Asterius produced one of the runs of the day with his first-up eighth in the final event, over 1300m.

While Schubert (33.26) managed the best last 600m of the race his run was ending as Asterius was holding his own late.

Favourite Newsfan lost no admirers despite her defeat, she ran 33.41 for her last 600m to fail narrowly.

My Nordic Hero isn’t a noted 1400m performer so his first-up effort behind Firsthand was a promising one.

With his best form around the 2000m mark and on soft tracks if he strikes that combination My Nordic Hero will take some beating but it appears he’s come back in fantastic order regardless.