Punters who made Chaussure favourite for his second run after a long layoff would be well served to stick with him when he steps out in distance at his next appearance.

The five-year-old stayed at 1400m second-up and after drawing wide was ridden back and those factors conspired to see him beaten but as Punters Intel data shows his effort had ‘back me next time’ written all over it.

Chaussure clocked the fastest last 600m of the Eden Brae Homes Handicap (1400m) of 33.82, the only horse to break 34 in the race, and if you spotted him rushing home late it’s no surprise his final 200m of 11.42 was also easily the quickest.

There are options for him to step up in distance in the coming weeks.

Stablemate Ombudsman showed himself capable over a staying trip last preparation and he indicated he’s come back in good order finishing just off Chaussure in eighth place.

His last 200m of 11.53 was the second best of the race, his second-up record isn’t flash but he’ll be worth keeping an eye on.

Godolphin galloper Gaulois’ first-up effort behind Dyslexic, in a race that was a sprint home, over 1300m is a sign he’s also going to be a force through summer and potentially a Villiers contender once he gets out to his favourite trip.

Gaulois was never going to pick up the two favourites in front but under the 59kg he reeled off 32.83 for his last 600m, 0.16 faster than any other. 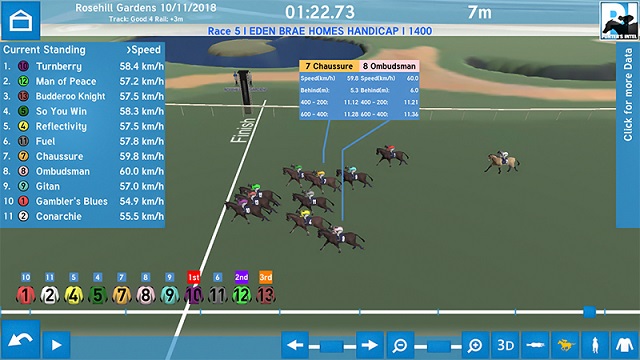 Ron Quinton has a smart three-year-old on his hands for the autumn in Royal Celebration who did a superb job to win the 2019 Membership Handicap (1400m) giving weight to all his rivals.

The colt will head for a spell and he has the scope to tackle better company in the new year.

Coterie has a city win in his near future if he can bounce off the gutsy effort he showed in the narrow defeat after riding the speed. The gap to third was significant which underlines the run.

Sexy Eyes was the shortest priced favourite of the day and she got the job done by a much smaller margin than most anticipated over stablemate Velocita who may have been unlucky.

Between the 600m and 400m Sexy Eyes took off around I Like It Easy and clocked 10.95 while Velocita had to check after running up behind leader Aurora Rose and she only ran 11.15 for that section.

That said, Sexy Eyes covered an extra 5.3m than the runner-up.

At Newcastle on Saturday the run of Vihari in an unlucky second at her second run back is worth noting.